“Why go to a machine when you could go to a human being?” – Ray Bradbury.

Amazingly, when the Review of 2014 comes around, it seems that one of my top accomplishments would actually have been refraining from sitting through the latest incomprehensible and interminably daft Transformers movie. Judging from some utterly horrendous reviews of Michael Bay’s latest epic-drivel, it must stand as a truly wretched experience. Increasing the volume and the running time does not a better movie make, Mr Bay; even when the feeble likes of Shit Lebeef jump ship, then you should know you’ll be going down with a real stinker…

So, why has it turned out to be such a dud?

As an admirer of traditional SF artwork, the digital conceptual art for this movie looks impressive enough (particularly the cool illo above) but what really makes my blood boil is that yet again, a colossal Summer movie has been unleashed completely devoid of a plot…

…of any kind. Just what blocks are we supposed to be busting here, hmmm?

With special fx at their most sophisticated level available, and an encouraging array of SF writers itching for the chance to produce a box office bonanza (myself included) there is simply no excuse as to why such tosh is still produced.

Maybe it was written and produced by machines… 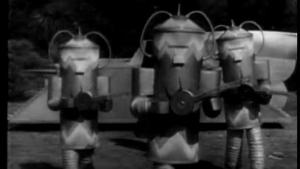 “Film-makers are always going to be… making movies that plug into society around them… after all, it would be sad if we only made films about alien robots” – Mark Boal.

Ever since Karel Capek coined the term: “robot” in R. U. R. (1922), a satire in which artificial men are upgraded to the point that they rebel and replace mankind. Menacing machines and dehumanized societies became all the rage, most notably in Killdozer! 91944) by Theodore Sturgeon and Player Piano (1952) by Kurt Vonnegut. Thus, a concept which gained prevalence in post-war SF happened to be the hybrid of humanand mechanical attributes i.e. the intelligent machine.

The machine-man – or android, if you will – has become a regular staple of popular SF. This theme was further enhanced through Isaac Asimov’s Robot series: I, Robot (1950) and The Rest of the Robots (1964), wherein he introduced the three laws of robotics. Naturally, this review would not be complete without mentioning that seminal classic: Do Androids Dream of Electric Sheep? (1968) by Philip K Dick, which questioned what differences were there between humans and androids; it concluded that the differences between flesh and metal were superseded by the moral judgments which separated benevolent and malevolent beings.

And yet we shudder to think how Capek, Asimov et al would have reacted to this abysmal mega-bucks toy franchise. Not too favourably, most likely...

So, no intelligent machines here – obviously, this concept does not apply to those big noisy trucks which can turn into best-selling toys. Or whatever. 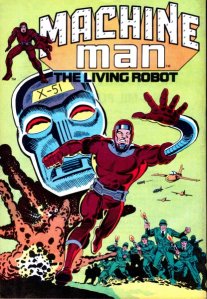 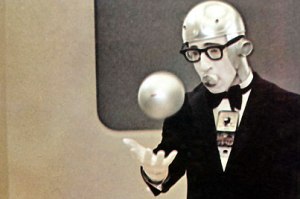 “The relationship between man and machine is, necessarily, one of the main preoccupations of SF. It is through our machines that we expect to remake tomorrow so that it will be different from today” – Brian Stableford.

For someone who has glumly fought a losing battle with most-things-technical, the steadfast optimism oozing out of the above quote is slightly off-putting. Honestly, the prospect of coping (in our own lifetimes) with an anthropomorphic machine seems too dire to contemplate. With any luck, it should carry the groceries and fix that strange sound in the pipes, and not have to contend with any Instant Puddings…

Is there any good to be gleaned from this rubbish of a movie? Is there any way to keep Michael Bay at bay?

There is no way this Post can end on such negative, pessimistic musings, so will endeavour instead to note that, in the meantime, there is some hope to be found amongst the Summer Blockbuster schedules. The latest instalment of the Planet of the Apes franchise is gaining some promising feedback. Early indications show that our local cineplex IS showing it with the English soundtrack. With any luck, the next Post will cover the Apes franchise, and give me the belated opportunity to marvel at Charlton Heston’s performance from the 1968 original. Now THERE was a star who would NEVER have stooped so low to appear in a movie based on a range of toys!

at the end of it all