“There were often strong elements of adventure and romance in… very early SF works… many of which are now considered classics of fiction” – Alex Davis.

Many moons ago, beyond the realms of credible science, and at the far reaches of the publishing world, the phenomenon of science fiction pulp magazines emerged. Briefly curtailed by World War II and the crippling paper shortages that came with it, a new wave of pulp SF titles hit newsstands during the late 1940s, and flourished throughout the 1950s.

While engrossed in the short stories of the 80s and space art of the 70s, my formative SF years were enriched by these magazines of the 50s. Initially captivated by their fabulous cover art, there was something quite charming about the colourful depictions of these space adventurers (both guys and gals) in what looked like goldfish bowls over their heads!

The first, most notable, American writer to contribute to SF magazines was Edgar Rice Burroughs, whose outlandish adventures of John Carter of Mars, became the first to introduce the concept of aliens as characters in their own right, although its legacy has been somewhat diminished lately in modern reviews which complain that “his powers of invention desert him when it comes to plots, which are of a roughneck variety.”

“Magazine SF provided intense pleasure for those who were insensitive to its literary shortcomings. It was hastily written for the most part… it was the emphasis on plot at the expense of character and scene” – Brian W. Aldiss.

For all its detractors, who insisted that pulp science fiction seemed too hackneyed, poorly plotted and devoid of characterisation (did the iconic cover artwork serve to detract from these supposed inadequacies?), there is a strong argument to suggest that the pulp era helped launch the careers of some of the most revered names synonymous with Classic SF. To give just brief examples, 1952 saw the first publications of work by Philip K. Dick and Frank Herbert, Kurt Vonnegut in 1953, and Brian Aldiss and Roger Zelazny in 1954.

One typical edition of these crudely manufactured magazines could contain one or two novelettes,  and (at least) half a dozen short stories, and it was up to the overworked and underpaid cover artist to devise a single irresistible image to sell the whole package. They were produced at minimal production and distribution rates and printed on the cheapest medium available: pulp-wood paper – hence the term: “Pulp Fiction.”

The garish style of those scintillating spaceships and bug-eyed beasties were very much of their time, matched in certain instances by the archaic scope of weird and wonderful writing spawled across its flimsy pages. 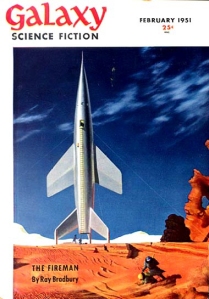 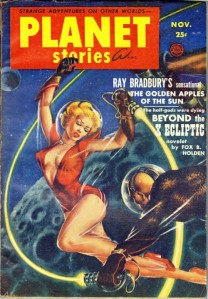 ^ A couple of pulp magazines featuring the work of Ray Bradbury.

“When I was seven or eight years old, I began to read the science-fiction magazines… Hugo Gernsback was publishing ‘Amazing Stories,’ with vivid, appallingly imaginative cover paintings that fed my hungry imagination” – Ray Bradbury.

Fortunately for the benefit of 1950s SF, the late, great Ray Bradbury had been heavily influenced – not surprisingly – by obtaining copies of pulp magazines from guests who stayed at his grandparents’ boarding house in Illinois. One of my cultural pursuits involved trying to track down copies of these magazines, but the poor quality which bedevilled this charming sub-genre meant that most issues have long since perished.

When one of the market leaders: Astounding Magazine changed its name to Analog in October 1960, it seemed like one classic period gave way to another – a fitting point at which to end this Post.

It seems a bitter irony that in order to preserve the memory of these ancient mags, we have to resort to uploading them onto the internet, the vanguard of ubiquitous modern technology. Emerging from my “virtual cocoon” (enjoying endless reams of long-forgotten works of SF art online,) it is disheartening to see that the wretched likes of Transformers are still playing to unbelievably packed multiplexes.

The way in which SF is enjoyed has dramatically shifted from books and magazines to movies and video games. While some may say that a more sophisticated, character-driven breed of fiction has emerged, others would argue that the traditional and cerebral literary form of the genre has been replaced by less imaginative visual representations produced with banal digital animation.

What do you think?