Stop Worrying About These Pet Projects!

“I can’t think of a better director. He’s a real fan. I think he’ll… take it in unexpected directions… It will certainly stand up to the others and probably break a lot of new ground as well” – Sigourney Weaver.

It has been common knowledge for some time that Sigourney Weaver wants to reprise her most famous role: Ellen Ripley. This week, it was confirmed that Neill Blomkamp (whose latest movie: Chappie has just opened) will direct Alien 5, after some of his impressive concept art for such a movie project recently emerged. Following some encouraging buzz online, Fox execs were quick to give Blomkamp the green light… but really, is this wise?

Let’s sift through the evidence: Blomkamp’s debut feature: District 9 (2009), was an intriguing anti-apartheid parable set in South Africa, and showed much promise. Yet when the less impressive Elysium received unfavourable reviews in 2013, it looked like the talent had collapsed. Now, instead of reversing the downward trend, Chappie – apparently an expanded remake of Blomkamp’s own 2003 short: Tetra Vaal – has garnered some very discouraging reviews.

On the strength of District 9, Blomkamp would have been good to go, but now, it looks like an ominous – almost regrettable decision. The latest edition of Time Magazine summed it up aptly: “The world needs good sci-fi movies. Unfortunately, Chappie isn’t one of them.” 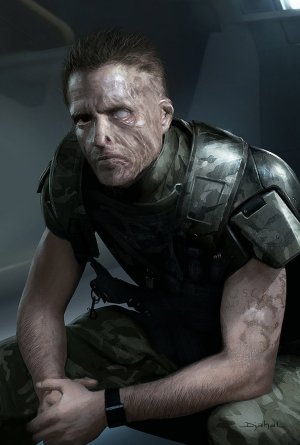 “…We’re gonna need immediate evac. I say we take off and nuke the site from orbit. It’s the only way to be sure” – Cpl. Dwayne Hicks.

The last time we saw Corporal Dwayne Hicks he’d had his face sprayed with a xenomorph’s acid. This past week, it was confirmed that the actor who played him back in 1986: Michael Biehn, had been approached to possibly reprise that role. Nearly thirty years on, is Biehn ready for active duty once more? “Yes…” he nonchalantly replied. “Looks like it.”

With this stunning news, we now have to erase Alien 3 (1992) and Alien Resurrection (1997) from memory; fine, some fans believe that both these underwhelming sequels deserve to be expunged from existence anyway. Which brings us back to Crappy. Sorry! Chappie…

It was a tough weekend, ruminating on whether to watch this new release. Just consider the paltry goods on offer: it splices elements of Short Circuit, Robocop and other goodness-knows how many ’80s robo-pics together into a disjointed mess; a supposedly “endearing” robot which soon resorts to violence – any chance of a meaningful exposition on artificial intelligence and its ramifications literally blown away; narrative shortcomings aplenty; there appear to be no likeable characters anywhere because it is “too tonally conflicted to engage our sympathies.”

Die Antwoord are probably the most disconcerting aspect of the whole package. Had never heard of them before; now wishing they had stayed beyond my sensors… And Hugh Jackman sports a mullet…

Science fiction should not have to be as painful as this…. surely? Can count avoiding Jupiter Ascending as one of my finest accomplishments during February, but there was no warning about this other misfire lying in wait…

Is Chappie as bad as it looks? Please feel free to Comment.

“You’ve been in my life so long, I can’t remember anything else” – Ellen Ripley.

From Alien to Avatar, Sigourney Weaver has shown how to create bold and no-nonsense roles for women in SF. Can’t help thinking that she would have presented an infinitely more suitable casting choice than Jodie Foster in Elysium…

Last week, while publicising Chappie – in which she plays the CEO of a weapons corporation – this charming and versatile actress – recalled how her next project came about: “…You know it’s a pity we didn’t really finish the story. I said: ‘I should probably talk to Jim Cameron about that.’ And he [Blomkamp] said: ‘Don’t talk to Jim about that, talk to me about that.’ So we kept talking about it.”

From the first day on the set of Chappie, Blomkamp enthused about his admiration for the first two Alien movies to Weaver; and then he “started sending these incredible paintings of this world and some very detailed story ideas…”

Yes, but as we have seen, unfortunately, time and time again, how so many projects began with the most impressive pre-production designs only for the finished film to flounder so disappointingly. Weaver should tread cautiously; we don’t dispute that Blomkamp is a swell guy – it’s just that his grasp of SF seems to have diminished somewhat of late…

On the possibility of working on an Alien 5 with Neill Blomkamp, Weaver remarked: “It would be cool… because I’d love to work with him again.” Very diplomatically, she continued: “…If it’s happening, I’d be curious to know how I would not be in it, but I imagine the alien is in it, and they’ll probably make his deal first, and give him more money.”