Is It Still Possible To Create Original Comics In The Age Of The Comic Book Movie Blockbuster?

“Where once comics were summarily dismissed as light entertainment for adolescent boys, there are now comics for everyone by everyone. In many ways, there has never been a better time to read comics” – Eric Stephenson.

This past week saw both the 80th Anniversary of The Phantom, the archetype for the costumed comic book superhero (created by Lee Falk), and the record gross for Deadpool, the latest Marvel character to get a solo outing on the big screen. So, a comics-related Post here seemed sorta inevitable.

It’s unbelievable now, but during the 1990s, comics looked to be on the way out.

Video games were surging in popularity; an upcoming medium called “the internet” was predicted to transform our leisure time; indie comic stores were struggling to stay in operation: how would/could comic books survive?

Fast forward to the here and very much geeky now.

More comic book titles than ever before are in regular production. Encouragingly, more original titles than reboots are appearing on the shelves. Movie producers eagerly scan the most popular titles to see what will make the most successful strip-to-screen conversion.

Fortunately, my first phase of comic book-collecting (198o-1983) occurred at what most people considered the “right age” to immerse oneself in such products. With the emergence of “mature” titles during the 80s, the age range significantly increased. Nowadays, comic books are no longer the province of youths; guys in their 40s – even 50s – scour comic books. And no one bats an eyelid.

When “analysts” state that it’s a “new kind of culture” they invariably tag on such annoying terms as “more free time” and “disposable income.” They overlook the inescapable truth that if modern twenty-(and thirty!)somethings do have an income, it is too darned miniscule to be disposable! Somehow, though, they are the demographic most likely to have made Deadpool the new record-breaker at the cinema.

Well, Brad is a Bunny With A Bushido – ha, TOP THAT, juves! 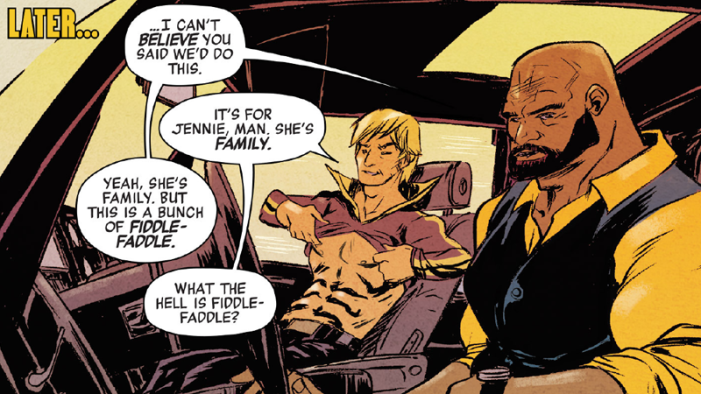 “When I was at Marvel and our newsstand comics were on spinner racks that touted them as wholesome entertainment for kids, I wouldn’t allow profanity” – Jim Shooter.

Thankfully, this week saw the most-welcome return of childhood Marvel faves: Power Man and Iron Fist. Especially chortlesome is the ingenious way in which this series gets round the age-old swearing bug, as you can see above!

Perhaps the most heartening trend in this recent comic book popularity resurgence is the remarkable increase of female readers. As such characters as Gwenpool and Squirrel Girl – not to mention Jessica Jones – have clearly demonstrated, yes, it is quite possible to have popular – and original – female-orientated titles.

Of course, there should be more to comic book creativity than just rad and contentious race/gender switching. As Image Comics publisher Eric Stephenson mentioned at ComicsPRO’s AGM last week, the comic book industry is doomed to repeat the same old mistakes that brought Marvel Comics to the brink of bankruptcy twenty years ago:

“We’ve gone back to gimmicks, to variant covers and relaunches and reboots and more of the same old stunts disguised as events, when really all our readers want are good stories.”

“Mortimer Hill is a veteran officer who has busted his fair share of criminals, but when mechanical monsters start causing trouble he’ll need to use all his wits (and brawn!) to get to the heart of the mystery” – all-comic.com

Ah, the wonders of Steampunk!

It’s amazing how this site has not done an appreciation piece about this unique genre much sooner. Trouble was, you could never tell the best place to start.

No worries: The Precinct – published by Dynamite – seems like quite an intriguing prospect worth pursuing. Through one major comics blog, its striking covers have regularly appeared on my Reader these past few weeks. In the sprawling, steampunk metropolis, only the officers of The Precinct can maintain law and order!

With so many new unknown names in the script and art depts these days, it is admittedly difficult to keep tabs on all of them. Some legendary names from yesteryear would be nice…

“I find most superhero stories completely meaningless… So long as the industry is geared towards… the same brightly coloured characters doing the same thing forever – you’re never going to see any real growth” – Garth Ennis.

These two names leap out at me – or anyone who savours comic book talent of the highest order. Garth Ennis is an award-winning writer, responsible for DC Vertigo’s The Preacher, and the best issues of Hellblazer (John Constantine’s solo series) during the ’90s; the name of Carlos Ezquerra, meanwhile, will always be synonymous with Strontium Dog, one of the best stories to appear in legendary, ongoing British comic: 2000AD.

Published by Image Comics, Bloody Mary – “set in a world only slightly worse than our own” –  looks like those far-out comics me and me mates used to dig during school lunchtime. It’s due to hit the stands next week.

Mary Malone, a gun-totin’ nun: surely not your run-of-the-mill fiddle-faddle?! 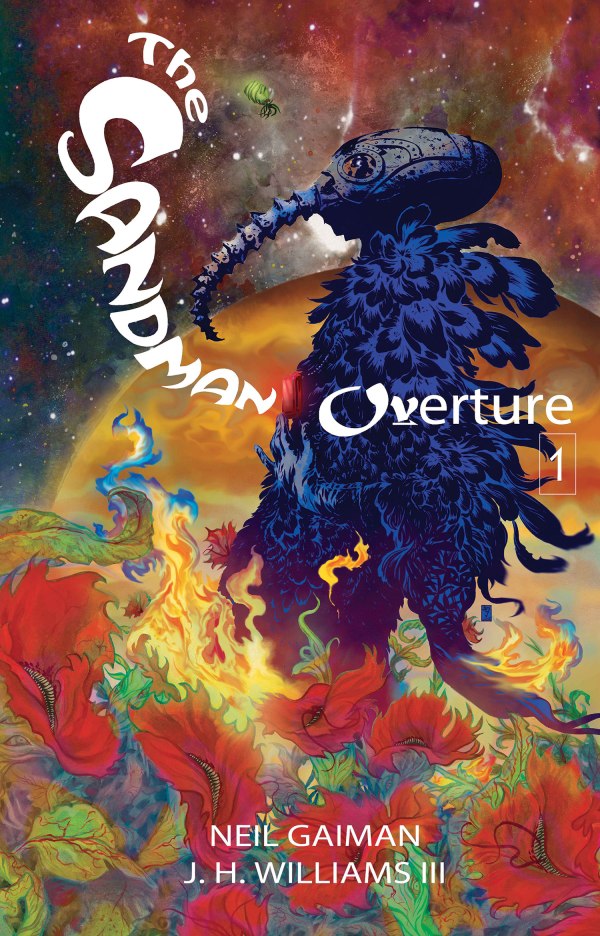 “Home. It feels so good to be back… I left a monarch. Yet I return naked, alone… Hungry. Weakened, I clutch a passing dream…” – The Sandman.

If anything, my second phase of comic book-collecting (1989-1994) was motivated primarily by the release of Neil Gaiman’s classic, game-changing title: The Sandman: Master of Dreams. Alternating between enchanting and unsettling, but always inspirational, this title – along with Swamp Thing and Hellblazer – helped establish a darker, more mature, more sophisticated side to the medium.

To celebrate its 25th Anniversary, Gaiman agreed to return to his outstanding realm of dreams. That classic premier issue (dated January 1989) told how, in 1916, a British magician: Roderick Burgess intended to entrap Death, but instead caught Dream, her little brother. Sandman: Overture is a Prequel, chronicling the events that led to this complicated member of the Endless getting into that predicament.

Originally released in 2013 as a six-part miniseries, with particularly sumptuous artwork by J. H. Williams III, it was published as a complete graphic novel just in time for this Christmas just gone.

It would take a real sourpuss knick-knack-paddy-whack not to be impressed by this!

Couldn’t let you go without slipping in just one page of awesomeness:

As you can see from the striking image above, it is imperative that this mesmerising book gets – by hook or by crook – into my collection. Neil Gaiman’s Sandman really is the pinnacle of graphic magic.

Any Collector would want it to grace their shelves, because – quite simply – it is: