“Wait a minute, Doc, what are you talking about? What happens to us in the future? Will we become assholes or something?” – Marty McFly.

At last, Marty McFly, who is the “only kid ever to get into trouble before he is born,” has arrived today on this date – to sort out his kids.

Back To The Future, released 30 years ago, is a fine sci-fi adventure, held together by Marty McFly and Doc Brown’s great buddy-repartee – once you get past the heavy premise of his Mum falling in love with him and not George McFly,

Back To The Future II, on the other hand, is a sequel that failed to impress me back then. After finding 2015 too heavy to handle, Marty must travel back to 1955 again to prevent the chaos of an alternate 1985… without interfering with his first trip. So, it’s needlessly complicated, and too heavy to sit through…

Even in November 1989, when Back To The Future II was released, there was no way to predict what 2015 would bring. So it really doesn’t come as any surprise what the visual futurists managed to come up with. Rather than pine for the lack of hoverboards – which thousands of other bloggers will be doing today anyway – let’s take a look and see what the ’80s perception of 2015 brought us.

“The encounter could create a time paradox, the results of which could cause a chain reaction that would unravel the very fabric of the space time continuum, and destroy the entire universe…!” – Dr. Emmett Brown.

When 1985 McFly wanders bewildered around 2015 Hill Valley one of the more intriguing revelations is Jaws 19 (directed by Max Spielberg, Stephen’s son, born in 1985) at the Holomax. Holographic movies may be imminent, according to the latest science sources, but there is greater sophistication of 3-D technology in movie-making now than ever before.

People dispose of their garbage on the back seat and still – incredibly – along the dashboard, but not in a Mr. Fusion energy converter. Doc’s rejuvenation clinic is not far off from all the botox injections and chemical gubbins that proliferate nowadays. You do realise, of course, that plot device was put in so that Christopher Lloyd could complete Parts II and III without spending so much time and angst in the make-up chair…

Yes, nostalgia for the 80s is quite prevalent now, so having the Cafe 80s in Hill Valley is spot on; and – get this – Charles Gherardi plays “Ayatollah Khomeini Video Waiter.” Swell.

Actually, there was one horrendous moment which thirty years cannot erase from my memory. The doorbell rings. Marlene McFly comes stomping down the stairs and we see that “she” is played by… Michael J. Fox! Holy flux!! 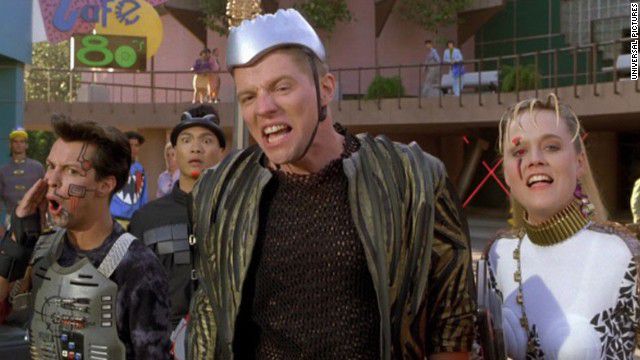 “Now look, just take it easy and you’ll be fine, and be careful in the future” – Officer Reese.

Before you criticize the ridiculous get-up of Biff Tannen and his gang, this blogger can actually report – quite sobre, but with dread – to have seen any number of morons dressed like this… and in several countries too.

The wall of multiple channels on a large widescreen TV and video-conferencing (Skype!) look eerily familiar, and it’s amazing to see how preoccupied Marty Jr is with his hi-tech specs. No handheld phone gadgetry, although in one scene, one character campaigning to restore Hill Valley’s clock tower seems to be holding a tablet. But making a call on an AT&T payphone? In 2015?! Ha! Remarkably, the worldwide web only made its debut in the same year as the release of Back To The Future II!

Interestingly enough, among Part II’s DVD extras, the Director: Robert Zemeckis tells how he did not want the sequel to take place in the future as any movie set at a future date always ends up “mis-predicted.” No doubt, he had envisaged hordes of bloggers on this very day nitpicking all the stuff that Part II got wrong…

As the Doc said: “Your future is whatever you make it, so make the best of it.”

Synchronize your watches! The future’s coming back…

To find out how it all began, you can view it here:

A BIG THANK YOU to Followers old and new for ALL your support along the way, and hey, here’s to even bigger and better awesomeness in the – ahem – future. 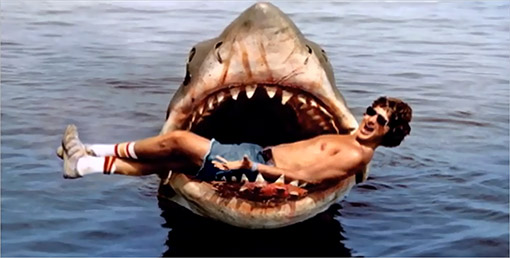 “Wow, this is like a movie I just made about a truck and a driver. Jaws and Duel both have four letters; they’re both about a leviathan going after man” – Steven Spielberg.

On this day forty years ago, the stupendous box office success of a movie about the terrifying threat of a great white shark in the sea off Amity Island introduced the template for the phenomenon largely accepted now for granted: the Summer Blockbuster. Director Steven Spielberg – previously responsible only for Sugarland Express and Duel – would hit the big time after this movie.

The casting was relatively easy: Roy Scheider was chosen by to play Police Chief Martin Brody because Spielberg liked him in The French Connection; Robert Shaw was chosen to play Quint because Spielberg liked him in The Sting; but the role of young oceanographer: Hooper was not so assured. Then-current stars such as Jon Voight, Timothy Bottoms and Jeff Bridges were considered, but none were available. In the end, Spielberg’s pal George Lucas suggested Richard Dreyfuss, because he had starred in American Graffiti.

To put this first blockbuster into perspective, the (estimated) budget of Jaws was only $8 million. It opened on 1 June 1975 on just 409 screens. After 78 days, it became the Highest Grossing Movie of All Time – in that it was the first ever movie to cross over the $100 million mark – a fact largely forgotten, considering that this tremendous honour would last for only two years. In the Summer of ’77, a little film by the name of “Star Wars” was let loose on an unsuspecting cinema-going public… 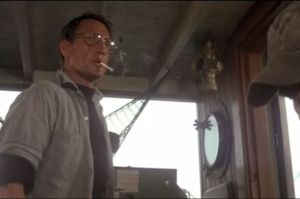 “Slow ahead… I can go slow ahead! Come on down here and chum some of this shit…!

Cinema’s first blockbuster offers a myriad of intriguing aspects. Essentially, Jaws is a movie of two halves: as soon as the three intrepid hunters set out on the Orca, a more intense viewing pleasure kicks in.

Having mentioned the three main characters, what about the real star himself? A huge mechanical shark was constructed, but the first time it was put into the water, it sank. Named “Bruce” by its despairing “assistants” and the “Great White Turd” by Spielberg himself, it spent most of filming broken-down, and – not unlike some of Hollywood’s more notorious legends – “was unavailable for certain shots.” Those Pre-CGI days were arguably more fun…

The innovative shots of the camera in the water trained upwards, to give a “shark’s-eye view” was never intended – they came about purely due to Bruce’s inoperability. Apparently the shark prop was named after Spielberg’s lawyer, but please tell me that’s not true!

No feature on this movie would be complete without mentioning the ominous score composed by John Williams. At first, the composer previewed it on the piano; the director thought it sounded… completely ridiculous. Only much later, through full orchestration, could its true powerful and spine-chilling tones truly resonate.

Could Jaws have prospered without this classic theme? It seems most unlikely. Cinemas around the world may not have had queues going out the door and down the road if the movie did not have the expressive power of Williams’ score. Deservedly, Williams won the Academy Award for Best Original Dramatic Score and has taken sixth place on the American Film Institute’s Top 100 Greatest Film Scores. 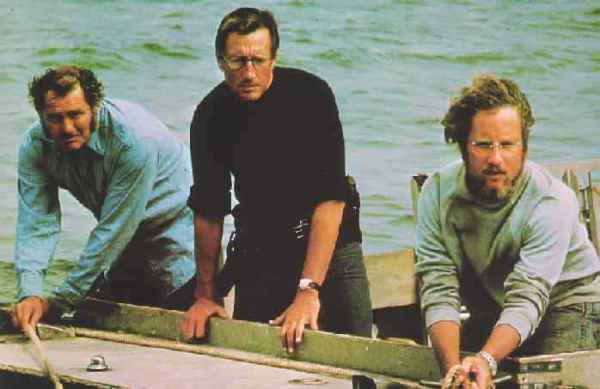 “I think that I am familiar with the fact that you are going to ignore this particular problem until it swims up and BITES YOU IN THE ASS!” – Hooper.

Martha’s Vineyard, Massachusetts, was selected as the location for Amity Island, used on strict condition that its “natural harmony was not affected.” The locals were incredibly co-operative during filming. They made ideal extras when the script required 4th of July holiday-makers to go bat-shit crazy on the beach. Payments of $64 each seemed to have done the trick as well…

Speaking of the script, that took an awfully long time to develop; at one point, Spielberg worked on his own draft, hoping that would speed things up. Some of his own scenes ended up in the final edit. Originally, Peter Benchley – the author of the bestseller who had a cameo in the movie as the TV news correspondent filming a report on Amity beach – struggled to settle on the final title even with only 20 minutes until the presses started rolling.

Some of the provisional titles he considered included: “The Stillness in the Water” and “Leviathan Rising.” He seriously contemplated: “Jaws of Death” until his Editor merely pointed out that it would be easier to go with just the first word as it was short enough to fit on the cover jacket. 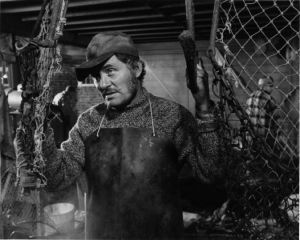 “Y’all know me. Know how I earn a livin’. I’ll catch this bird for you, but it ain’t gonna be easy. Bad fish. Not like going down the pond chasing bluegills and tommy cods” – Quint.

After four decades, the movie still holds up remarkably well. Mainly it is driven by three superlative central performances, and they had fantastic material to work from, but for me – every time – Robert Shaw just rules the screen. From the moment he makes his dramatic chalkboard-scratching introduction, you just know that you are going to see one of cinema’s most superlative performances.

At first, Spielberg had considered Lee Marvin (who turned it down, stating that he preferred to fish for real, not in a movie) and Sterling hayden, so it was fortuitous movie-making fate that Shaw stepped in – although perhaps not for Dreyfuss…

While tension brewed on the Orca between Quint and Hooper (“I don’t need this working-class hero crap!”), off-screen what came to be known as the Dreyfuss-Shaw feud raged, with the fiercely-competitive Shaw picking on the younger, less experienced actor. “It got ugly!” the Director recalled.

If there is any moment that sets Shaw’s contribution apart, then it is undoubtedly the much-heralded Indianapolis monologue. Rightly regarded as one of the most outstanding movie scenes ever shot, the dialogue was initially conceived and written by two other scriptwriters; however, Shaw rewrote great chunks of it himself. All Scheider and Dreyfuss could do was listen to one of the greats at work…

You can savour this one-take classic scene right here:

Let us be thankful that Spielberg made Jaws at all; when he originally saw the vague title, he simply ignored it, under the impression that the book was just a boring biog of a dentist…

Quint: “You wanna drink? Drink to your leg.”