Not For The Nervous

“That thing in the cellar is NOT my mother!”

‘Tis the night of All Hallows Eve once again(!) Blimey, it keeps swingin’ a-round with ever-more-frightening-regularity doesn’t it?!

The origins of Halloween can be traced back 2,000 years to the Celtic festival of Samhain (pronounced sow-in). The Celtic New Year fell on the first day of  November – a day marking the end of summer and the harvest, and the beginning of winter: a season most associated with death. The Celts believed that on the night before their new year, the boundary between the worlds of the living and the dead became blurred. Thus, on the night of October 31 they celebrated Samhain, when it was believed that the ghosts of the dead were more likely to return to the mortal plain. This festival involved huge bonfires on which crops and animals were burned as sacrifices to the Celtic gods. People wore costumes – more specifically, animal heads and skins.

With Celtic territory subjugated by the Roman Empire during the first four centuries CE, two Roman festivals gradually became incorporated into the traditions of Samhain: Feralia, a day in late October on which the Romans traditionally commemorated the passing of the dead; and Pomona, a day reserved to honour the Roman goddess of fruit and trees. Her symbol was the apple – hey! That’s where we get apple-bobbing from!

In 609 CE, the Catholic feast of All Martyrs Day was established in the Western church. Later, the festival was expanded to include all saints, and moved from May 13 to November 1. In 1000 CE., the church made November 2 All Souls’ Day: a day to honour the dead – a deliberate attempt to replace the Celtic – HEATHEN!! – festival of the dead with a “church-sanctioned holiday.”

Remarkably, though, All Souls’ Day bore all the hallmarks of Samhain, with big bonfires, parades and dressing up in costumes (especially saints, angels and devils). It also came to be known as All-hallowmas (from the Middle English Alholowmesse meaning All Saints’ Day) and the night before it, the traditional night of Samhain began to be called All-Hallows Eve and, eventually, Halloween.

But you didn’t turn up here to be bludgeoned to boredom by Professor Brad, did you?! NAY!

In a packed goody-bag of tantalizing TRICKS tonight, expect to be TREATED to some of the most groovy sights and sounds of horror!

Speaking of groovy sights, the cobwebs of my Attila The Nun costume have been brushed ON, so expect this evening’s party to become particularly frightful.

How about some music? Might cover the noise we make…

Why – when yours truly doesn’t even dig zombie movies, fer cake’s sake! – does George A. Romero’s Dawn Of The Dead hold a reserved spot in my all-time Horror Top 10?

Why, when there’s no more room in hell, the dead will walk the mall?

Why did so many decent, seemingly placid, Pennsylvanians volunteer to “play” all those zombie extras?!

Why did Roger, (one of the most badass protagonists in horror movie history) have to get bitten – and come back like that?

Why does such a gonzo film that so radically tonal-shifts from flesh-eating to pie fights (and back again) make for compelling viewing no matter how many times you watch it?!

“Right, and we’re up here doing traffic reports! Wake up, sucker! We’re thieves and we’re bad guys. That’s exactly what we are. We gotta find our own way” – Peter Washington.

“When the music stops, you’ll see him in the mirror standing behind you” – April Perron.

Hey, if you’re surfing through your streaming services hunting for a really scary movie to watch tonight, you might like to try Session 9 (2001). An obscure, totally under-rated chiller, even yer own buddy Brad had not heard of it until only three months ago.

A group of guys are assigned a 2-week job to remove asbestos from an old abandoned asylum, but pretty soon they realise that the building’s dark history – especially a demonic entity known only as “Simon” – is catching up with them.

There is such a constant, creepy feel throughout – some may find Session 9’s slow-burn atmosphere quite unsettling, yet to me, it’s a most-welcome alternative to all those wretched slasher flicks that have spoilt the horror genre.

Disappointingly, the denouement had to be branded with that ever-so-tiresome trope of pools of blood, but the violence is, thankfully, minimal and the fear factor throughout is more psychological.

DARE YOU to watch this shocker…

During the witching hour…

Doctor: “And where do you live, Simon?”

Mary Hobbes: “I live in the weak… and the wounded… Doc…”

Wendy Torrance: “Oh, Jack. Thank God you’re here! There… Jack, there’s someone else in the hotel with us. There’s a crazy woman in one of the rooms! She tried to strangle Danny!”

Jack Torrance: “Which room was it…?” 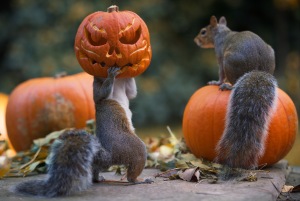 “There are three things I have learned never to discuss with people: religion, politics and the Great Pumpkin” – Linus van Pelt.

You’re still here?! My MY! You are a bold bunch! Let me remind you: it gets truly horrific from here until the end of this Post.

Here’s hoping you have a fearsomely-fun evening.

Tonight, as with EVERY Hallowe’en, you can find me wrapped up cosy and snug with me hot cuppa and a tub of Terrifying Toffee Twirls™ engrossed in my all-time favourite horror movie. (You can read a celebration of it right here)

Which scary movie will YOU be watching tonight?

Rumours have been circulating through our village today that the more… disreputable younglings in the community have hatched a plot to raid Brad Manor, particularly its legendary pantry of the sweetest delicacies. Have posted several of my minions on sentry duty at the North and South gates.

Uff, naturally they are somewhat dischuffed by this – they’d much rather be out Trick-or-Treating! (bless ’em)

Should any of those bally miscreants manage to break in, one butcher’s at Attila in all “her” (ahem) glory and, no doubt, they will make themselves scarce pretty sharpish. Heh heh heh…. 😉

“It was a dark and stormy night…”

“You have a lot of spirits in here, but there is one I’m most worried about because it is so hateful” – Lorraine Warren.

“WE WILL TEAR YOUR SOUL APART!” – Pinhead.