We Found Her And We Weren’t Even Looking…

“This is an… odd superhero action movie… There’s an eccentric splurge of tonal registers from boomingly serious to quirkily droll… A lovable cat makes an important appearance…” – The Guardian.

Imagine my nightmare. If you can…

Stuck in a packed cinema, trying to keep awake during the latest MCU instalment. Amidst a rather bland action scene – in space – one of the most annoying pop songs in living memory – by that eternally-detestable combo: No Doubt, no less! – starts to play.

Yes, it did make my one good eye roll.

No, it did NOT put a smile on my face…

You know, Bradman is NOT one to skedaddle from a battle, but in this case, the urge to split almost consumed me.

Moreover, to compound the no-good-niggles tormenting my throbbing bonce, the voice of Obi-Wan Kenobi throttled my mind:

“I’m getting too old for this sort of shit…”

After the jaw-dropping brilliance that was Avengers: Infinity War it seemed pointless going into Captain Marvel with any expectations. Nevertheless, confidence that we would get another top quality comicbook movie package remained fairly high.

The plot is your basic “origins” tale: Nick “Two-Eyes” Fury teams up with The Cat From Outer Space and they set out on a quest to find the memory of The Woman Who Fell To Earth, with the Jude Law and the Kree Order in hot pursuit.

Okey-dokey, methinks, so far, so groovy.

Before you can say: “Higher, further, faster, baby!” it descends into a dismal display of bland performances, incoherent narrative and some of the most lame and lacklustre lines heard in a long while…

And don’t get me started about the Skrulls: those nefarious shapeshifting aliens who look here like Trekkie cosplayers.

Rather than the despicable race as depicted in the comics, the BIG twist here is that they are the repressed refugees of the galaxy. And we’re supposed to empathise with them? Don’t you know what they say? “Keep your friends close, your Skrulls closer.” DON’T listen to them, Carol – IT’S A TRAP…

And just why on C-53 is Ben Mendelsohn trying to do an Andy Serkis impersonation…?! 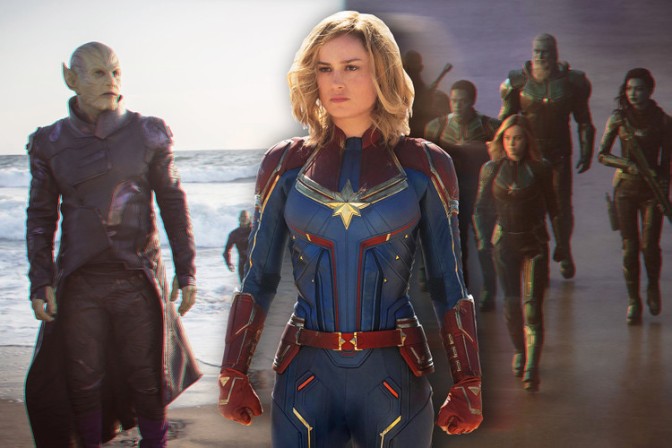 “Oh Captain, my Captain. There’s not enough on the page… It’s only two hours long and they kind of rushed through it…” – Double Toasted.

It comes as absolutely no surprise to learn that Roy Thomas – legendary Marvel writer who co-created Carol Danvers in 1968 – felt less than impressed with this movie.

“Actually, the one thing I really hated in the film was turning the Skrulls into a peace-loving race, with the Kree as the heavies.” he said in a recent interview. “As far as I am concerned, as the principal conceptualizer of the Kree/Skrull War, (and I suspect Stan Lee and Jack Kirby would agree with me) the Skrulls and the Kree are each as bad as each other, as they say. Having the Skrulls all mushy and family-friendly at the end left a bad taste in my mouth…”

The only aspect to please him was thus: “Still, Yon-Rogg turned out to be appropriately vile, and that’s all well and good.”

What about those 12-year old girls this film so desperately tried to impress and inspire? Incidentally, the number of that demographic in the audience at my screening could be counted on the “fingers” of MY gauntlet. And they looked bored to tears…

Wire sued Elastica for stealing their riff from Three Girl Rhumba. Nirvana lifted the bass-line from Killing Joke’s Eightites, which in turn “borrowed” from The Damned’s Life Goes On, and – hey! – here’s me slouching (nay, yawning!) in the middle of the latest MCU movie with my concentration drifting into such mundane musical matters, particularly wondering which alternative Kurt Cobain song would have sufficed instead, if at all…!

Is it any wonder that the only scene to actually move me happened to be the heartfelt tribute to Stan Lee over the Marvel logo? And the only cool scene was, of course, his cameo. He’s reading the script to Mallrats (also released in 1995), in which you can find the most extensive cameo of his illustrious acting career.

Anna Boden and Ryan Fleck have never made a comicbook movie before and, quite clearly, it shows. The montage of flashbacks from Carol’s early life are so fragmentary and ever-so-minimally informative (not helped by Skrull scientists jabbering over each clip!) that they look confusing, almost to the point of annoyance.

Imagine what a dramatic improvement we would have if allowed to see that key moment in the comics in which teenage Carol rebels against her overbearing Dad and walks out.

There should be a terrific performance by Lashana Lynch, as Carol’s best pal: Maria Rambeau, but, there again, the shoddy script deprives Maria’s role the chance to really shine. Moreover, the 1st Act needed a bonding moment between them – it would have instilled the emotional resonance this movie so sorely lacked.

The fact that three writers were involved proves yet again how:

Again, is this really the MCU we are dealing with here…?! 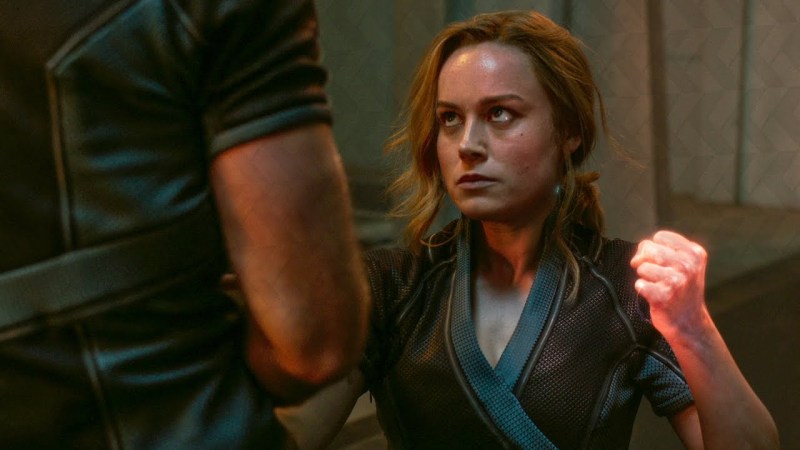 “They really tried to cram it all in… boring, generic, by-the-book, which is unfortunate for Marvel’s fist female-lead movie” – Medium Popcorn.

“Packed with action! Humour! And visual thrills!! With an origin story that makes effective use of the franchise’s signature formula!”

Allow me to suggest (mercifully briefly!) why this movie is regarded as  “good, but not great.”

Apart from the obvious observation that Larson lacks charisma, consider how Captain Marvel is supposed to be an origins story. Despite countless versions of this theme – some produced, remarkably well, within the MCU itself over this past decade! – the only spectacular revelation to be had here is the way it fails in this regard.

Bafflingly, the core of this movie is mysteriously bereft of a hero(ine)’s journey, so no revelation, atonement, redemption, or moral/ethical self-discovery.

Wow, she had no misdeeds and failings to rectify; no life-changing lessons to learn; no knowledge to attain; no challenges to overcome; therefore, we feel no curiosity or compulsion to follow what happens to her. Subjected to the full blast of the Kree core engine does not count as a “personal transformation.”

Ultimately, this is all a meaningless spectacle.

Always appreciated the origins story of Marvel’s other Cap: the classic, compelling Captain America: First Avenger. Where was the stirring equivalent “world doesn’t need a perfect soldier, but a good man,” speech amidst this mess? We waited and waited again for something other than a perfect Power Lady (so she doesn’t need to learn great responsibility either, yay!) but the real good – i.e. relatable, compassionate, etc. – Carol Danvers failed to show up…

When the “cat” freaks out, tentacles an’ all, it suddenly felt like a Men In Black movie – truly, one of the most abhorrent experiences anybody could suffer in a cinema…

Can’t get over the fact that the script is unbelievably inept. The dialogue is so clunky – Captain Clunky!

Despite having the “Supreme intelligence” onboard, there are too many dumb moments; considering all that flying: in jets, spaceships or just as herself, her “character” never gets off the ground…

This blog has been honed to practice (and hopefully perfect) my story-telling skills, for when my movie/TV breakthrough eventually comes my humble way. And yet this esteemed gig goes to…

this gaggle of amateurs…?!

Behold: the Plight of the Livid Brad?

Yours truly is too tired to generate any antipathy towards anyone or anything these days. So to read about these ignorant trolls wasting their energies – and our time – spewing their, quite frankly, pathetic Caps-Lock-laden rants at something they haven’t even bothered to watch(!) makes for the most bewildering behaviour.

Have reached that stage in my life whereby the race, sex – or even sexual orientation – of a character has become irrelevant, how that character is developed (or not!) however, means everything to me.

“The film may be about women breaking their shackles, but the lead actress feels kept in check for much of the picture. Humor winds up being provided by Samuel Jackson’s Nick Fury, heart by Lashana Lynch’s Maria Rambeau, and pathos by…well, it ain’t Larson” – San Diego Reader.

Having watched her in a couple of TV promotional interviews, Brie Larson comes across as witty and charming, so it’s a shame that “Vers”/Carol is denied the chance to bring these qualities to this muddled mix.

Out of 21 movies, this is the first with a female lead…

…and yet, instead, we’re all raving about how cool and funny Samuel L. Jackson as a remarkably-undistracting-de-aged Nick Fury turned out to be…

Fortunately, this interplay between Brie and Sam is fun and entertaining to watch – they obviously got along fine and dandy whilst working on Kong: Skull Island (gee, remember that?!)

Considering how Brie has signed a SEVEN-movie contract with Marvel, ensuring this Cap’s prominent role in the MCU’s Next Phase, this movie should have delivered a more substantial, more distinctive, and, if you will, more thought-provoking introduction to supposedly the most powerful hero in the MCU. Up until now, this franchise looked, and felt, meticulously planned, years in advance – from its expansive plot-unfolding to those subtle Easter Eggs – and yet this movie feels too muddled, as if hastily thrown together at-the-last-minute just to appease the crowd who have been crying out forever for a female-led Marvel superhero movie. Thus, it does not present a suitable prelude to Avengers: Endgame, in which the hotly-anticipated rematch against Thanos may likely culminate in GOOSE GOING FOR THE HEAD.

Whatever’s in store, in the ever-reliable hands of the Russo brothers, Avengers: Endgame ought to be a more epic and engaging eyeful than what we got here…

Yep, Captain Marvel is now the most powerful hero in the MCU.

She single-handedly drained my will to write for at least ten days after my trip to the cinema. And almost depleted my enthusiasm for the upcoming Endgame (!)

One fan Comment summed it up perfectly: “If Captain Marvel has to fight Thanos, I’ll be rooting for Thanos…”

Sure, the Captain Marvel movie may help pass the time, but it’s not worth dropping into a Blockbuster™ for…

what I was watchin’! I almost threw my chicken strips at the screen, man!” – rapper59.