Skip to content
Home“The Woman Is Breaking Free!”: The Evolution And Revolution Of Women In SF 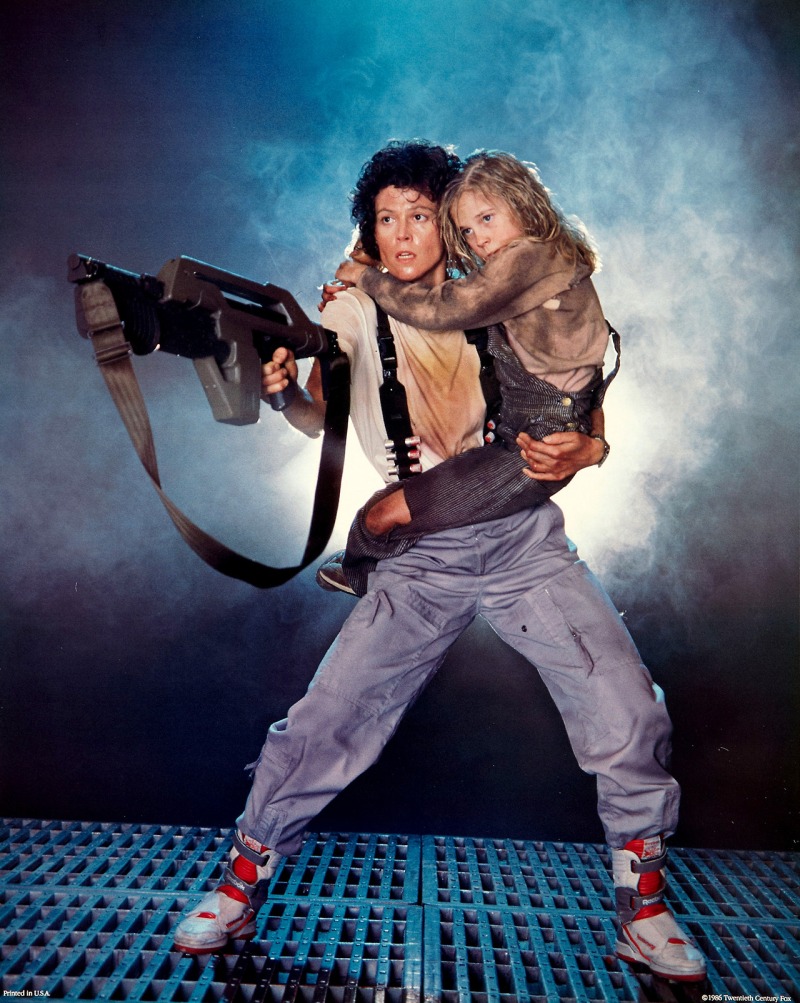 “Did IQs just drop sharply while I was away?” – Ellen Ripley.

Many many moons ago, at school, there was one quick, and somewhat sad, way to tell the difference between boys and girls:

Traditionally, my fav genre had been restricted to being a “Boy’s Own” pursuit long before my arrival on this Pale Blue Dot. My constant comic-reading consisted of Starhawk, Strontium Dog and Rogue Trooper – all male characters, of course! – used to irk some of the girls in my class no end. Despite trying to hide my mags, or chuck them over the playground wall, they never directly expressed any curiosity, or interest, in this reading-material. Shame, ‘cos such interaction might have extricated me from my insufferable shell a lot sooner…

Science fiction has always exuded a voracious appetite for change. And to reflect those gradual, now quickening, changes in society, most notably in attitudes towards, and rights affecting, women, the genre has dramatically achieved so much to this end and, promisingly, continues to do so.

To accompany this analysis, there will be a selection from the feminine side of Brad’s jukebox: 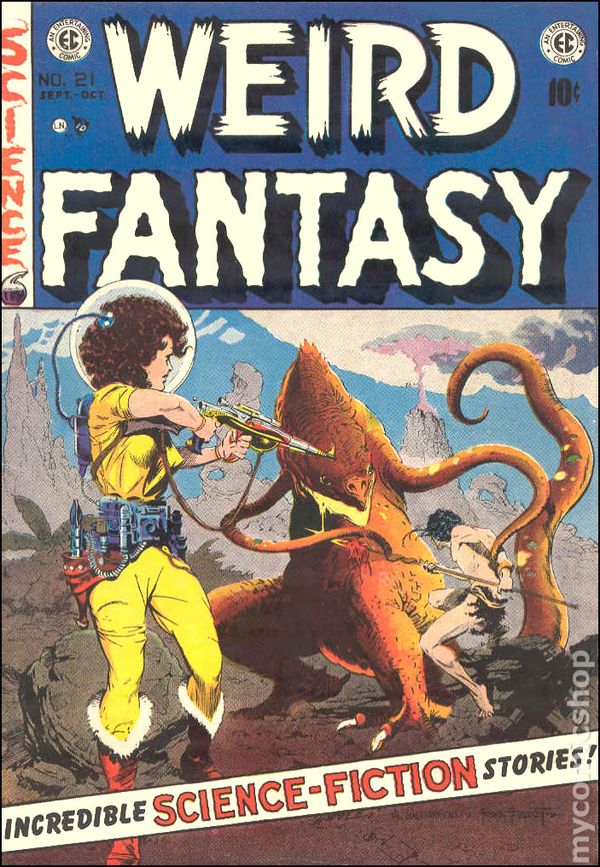 “This is what Jodie Foster said when she first looked at me: ‘You’re not nearly as big as I thought you’d be.’ I thought she was joking so I kind of giggled but she kept laying it on thicker and thicker… She wouldn’t let up. I was a little crushed…” – Dave Bautista.

At its best, science fiction makes us THINK.

And there was one particularly awesome comicbook cover that single-handedly altered my mindset in regards to women in SF.

In one of my most beloved books from the Library @ Brad Manor, a compendium: Alien Creatures, by Richard Siegel and J-C Suares (1978) – “Dedicated to those who haven’t landed yet” 😉 – on page 40 to be exact (that fact is proudly printed indelibly in my memory), this exquisite classic vintage cover (by Al Williamson and Frank Frazetta, above) of Weird Fantasy #21 made me realise the potential of incorporating strong, distinctive female characters in my own fiction.

Note how the traditional gender roles haye been reversed: this woman – armed and sensibly-dressed (obligatory goldfish-bowl permitting) – assumes an assured, active and commanding position in the foreground while the male is reduced to just scantily-clad manflesh. Bold, and very progressive, especially when you consider this artwork was originally published – slapbang in that “Boy’s Own” era – in 1953!

2000AD – still “the longst-running comic in the galaxy” – has always been considered to be an highly-esteemed tag to have on any comic writer’s/artist’s resume, and yet it’s most notable alumni began their respective careers… working on girls’ comics!

Lately, my scope of classic comics has veered towards British publications of the ’70s. Whilst searching for the “lost Starhawk stories,” in The Crunch, imagine my astonishment, but sheer delight, upon discovering “Ebony”: a black, female MI5 agent; for 1977, this looked like an extremely impressive and empowering premise –  the spitting image of Nina Simone, she’s every bit as tough and classy as Pam Grier! And way too cool to be this obscure. (Not surprisingly, there are no clear images of her online).

While stories for boys centred on action, comics for girls concentrated on romance.

Interestingly enough, there was indeed only one (albeit short-lived) British SF/fantasy comic for girls from that time: Spellbound. Heard a lot of encouraging items about one of its contents – that quartet of enhanced femme fatales: the Super-Cats, so will endeavour to check out this “Fabulous Four.”

Back then, one would have been branded a “sissy” if seen with a girls’ comic, but now, who cares…? 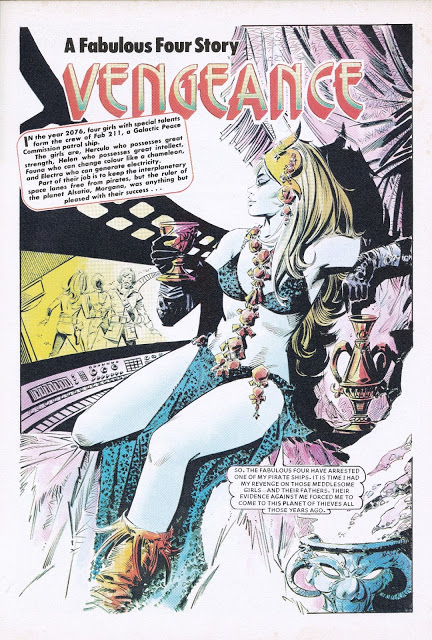 “Let me tell you something about sexism, girl. When you wear that costume, it cheapens you, but when I wear it, it cheapens them. It’s all about how you use it” – Emma Frost.

How apt: playing this on the Eighth Day of this month 😉

Let Hazel show you what a bona fide unorthodox-but-awesome songstress really looks and sounds like!:

J. Jonah Jameson: “You! Ms. Marvel!! I knew one of you super-creeps was responsible for this! Good or bad, it doesn’t matter – you’re all the same. You’ve got to be stamped out… and if J. Jonah Jameson has anything to say about it, lady, you will be!”

Ms. Marvel: (I hear you, J. Jonah, and I’d love to argue the point, if I had the time… but I don’t. I doubt you’d listen anyway. Still, that’ll probably become one more editorial hassle Carol Danvers doesn’t need…)

“The horrible immorality” argued Anatole France, ominously, as early as 1905, “…is to be the morality of the future.”

Whereas bygone authors of general fiction felt restricted from writing about the realities of human relationships, science fiction auteurs went ahead anyway and experimented with gender as well as genetics, and sex and sexuality in addition to science and scientific plots.

The main credit for breaking through the barriers of taboo is usually given to Philip Jose Farmer, whose The Lovers (1952) dealt with the unfortunate consequences of a love-affair between a man and an alien, although some would argue that Nice Girl With Five Husbands  (1951) by Fritz Leiber, at last deserves critical reappraisal.

The 1960s proved permissive enough to see an influx of more gender-based stories; Harlan Ellison’s anthology: Dangerous Visions (1967) confirmed that any speculative fiction concerning sexual matters could thenceforth be published, while the ground-breaking Left Hand Of Darkness (1969) by Ursula LeGuin offered a more sensitive approach to sexual roles and mores. The 1970s witnessed an increase in feminity – and feminism – through science fiction with the most prominent examples being: When It Changed (1972) by Joanna Russ and Marge Piercy’s Woman On The Edge Of Time (1976).

More varied roles for female characters appeared on a relatively healthy basis up to the end of the 20th century, and beyond, culminating in the current blossoming subgenre of YA fiction.

Princess Leia: “All troop carriers will assemble at the north entrance. The heavy transport ships will leave as soon as they’re loaded. Only two fighter escorts per ship. The energy shield can only be opened for a short time, so you’ll have to stay very close to your transports.”

Princess Leia: “The ion cannon will fire several shots to make sure any enemy ships will be out of your flight path. When you’ve gotten past the energy shield, proceed directly to the rendezvous point. Understood? Good luck.”

Arguably, the strongest, most positive female role in science fiction has to be Ellen Ripley, superbly played by the incomparable Sigourney Weaver.

The character had originally been written as male, but Sigourney impressed the director: Ridley Scott to such an extent that he not only changed the course of movie history, but furthered the opportunities for women’s roles in science fiction. Crucially, when she returned in the equally-impressive sequel: Aliens (1986), the addition of terrorised infant, Newt, allowed Ripley’s character to be enhanced by expressing long-suppressed calm and compassionate maternal instincts.

We inevitably turn our attention to the woman’s role that defined its time: Princess Leia, immortalised by the late great Carrie Fisher.

Some would argue that she was upstaged by that young farm boy; he was the one who destroyed the Death Star and received the glory, cake and medal, but the cultural – and psychological –  impact that Leia had on each generation over the last forty years makes said space station look like a ping pong ball…

“Well somebody has to save our skins…”

But that was before the dark times.

“What chance do we have? The question is “what choice.” Run, hide, plead for mercy, scatter your forces. You give way to an enemy this evil, with this much power and you condemn the galaxy to an eternity of submission. The time to fight is now!” – Jyn Erso.

In this modern Star Wars era, there is, alas, not much to get excited about.

The lone redeeming item is Rogue One: A Star Wars Story. It offers a striking lead performance by Felicity Jones – an ingenious case of casting as Jyn Erso; her soft and slight build belies the fact that she has had to become tough, confident and resourceful – she was more of a “rebel” in every sense of the term than any other member of that Rebel Alliance.

One of the multiple problems that beset Star Wars: The Last Jedi is the baffling observation that although the cast featured a commendable and considerable number of female figures in its cast, due to poor writing, strong, discernible characters did not manage to flourish.

Naturally – ‘cos you know it’s Brad – we come to the MCU, the franchise that just keeps on giving. There are various instances of strong and commanding superheroines therein, to name but a few:

Scarlett Johansson’s Black Widow is the only reason to watch Iron Man 2 (which should have been the Black Widow we all deserve!) and she further excels in the Avengers movies AND Captain America: The Winter Soldier; Hayley Atwell is exceptional as Agent Peggy Carter in Captain America: The First Avenger; whilst my personal fav (see below!): she’s not a queen, or a monster, she’s Hela, the Goddess of Death.

And we come to the latest – and possibly most game-changing – instalment: Captain Marvel.

Where there’s good, there’s bad – cue the rise of that “horrible immorality” in the repugnant form of sexist trolls who have crawled out of the depths of their own ignorance, this time, to belittle Brie Larson: the first female lead in a Marvel movie. Rather than shut down her TwitFace™ account (or whatever you blessed younglings call the bally thing) she’s done what any honourable superhero would do: STRIKE BACK.

“You know, I used to want to be a Valkyrie when I was younger, until I found out you were all women. There’s nothing wrong with women, of course, I like women. Sometimes a little too much. Not in a creepy way, just more like a respectful appreciation. I think it’s great, an elite force of women warriors” – Thor.

And so, considering how – over thirty decades ago – such a prospect would have seemed unthinkable (certainly in my school yard), SF enjoys a poignant and promising age in which more girls and young women than ever before actively watch science fiction movies at the cinema, read SF novels – AND comics!! –  participate in, and cosplay, at comic conventions in record numbers. More crucially, some have been inspired to create their own far-reaching fiction!

Let me say how, for me, this is a genuinely thrilling and reassuring situation to behold. Long may it continue!

Let me finish by saying just this:

Those girls who, back in the day, nabbed my comics, now, most likely, have daughters who wholeheartedly embrace science fiction!

And, what’s more, if they can craft an intergalactic saga better than anything this humble ol’ nerfherder could muster, then that would be really groovy.

Sarah Connor: “Kyle, the women in your time, what are they like?”

8 thoughts on ““The Woman Is Breaking Free!”: The Evolution And Revolution Of Women In SF”