Skip to content
Home“The Purfuit Of Happineff”: Happy 4th Of July To All My American Friends!

Hip Hip Hooray! Let’s Hear It For The US Of A!

As far as one can remember, America always had something bigger and better to offer. British television: yes, all three channels, just two if you include the broadcasters’ strike (one of many in various sectors to cripple the UK during the late-’70s) languished in the doldrums. Even Doctor Who – that longest-running bastion of SF TV, its already-miniscule fx budget hindered even further by a technicians’ strike at the BBC!  – could not compete against the flashier, more expensive likes of Battlestar Galactica, Buck Rogers, or The Muppet Show, The Incredible Hulk, Starsky & Hutch, Kojak(!) (et al, etc. etc.) for that matter. Who (else) did we have? Metal frickin’ Mickey, that’s who – who?? Exactly!!

Compared to the subsequent decade, The British Film Industry offered larger, more expensive than usual, but ultimately unattractive movies, but nothing like those two gargantuan smashes of 1977 and 1980 respectively (you know what they were!) that sent cinema queues trailing down the street. And then around the corner.

So finger-lickin’ good: American comics, American toys – heck, even American words – dominated our school playground. Yay, our precious post-punk platters led the way in the pop parade, but let’s face it, our own Claire Grogan was cute, but Debbie Harry was gorgeous.

Still, my father actually spent some time in the US during the ’60s, and was that close to getting a really great job in aviation – so, for that brief time (28 years ago) Brad found himself the centre of attention for once! Until one of the other kids announced that his Dad actually was American, and the throng gravitated to his side of the bike shed, eager to catch a glimpse of the bigger and better delights he could reveal from his Starsky & Hutch satchel.

Anyway, one of the various quality products that my father brought back with him – and enriched my childhood – included a classic Stan Freberg long-player (in Stereo!)

“Tell me and I forget. Teach me and I remember. Involve me and I learn” – Benjamin Franklin.

Generally, my music tastes gravitate towards the Blues, Soul and Jazz – all the phenomenal African-American essentials.

Which is my favorite American band, you ask?

The Doors immediately excite the senses, but what gets me every time has to be Creedence Clearwater Revival. Ever since Bad Moon Rising caught my attention in An American Werewolf In London, they have held a very special place in my heart. And my record collection!

This was always my go-to tune on Karaoke Night:

“My God! How little do my countrymen know what precious blessings they are in possession of, and which no other people on Earth enjoy!” – Thomas Jefferson.

Just thought it would he groovy to fill this gap to ask:

How will you be celebrating today? Where will you go? What will you eat? How many fireworks are required?

Is it the same every year?

Will be thrilled to read your Comments! 🙂 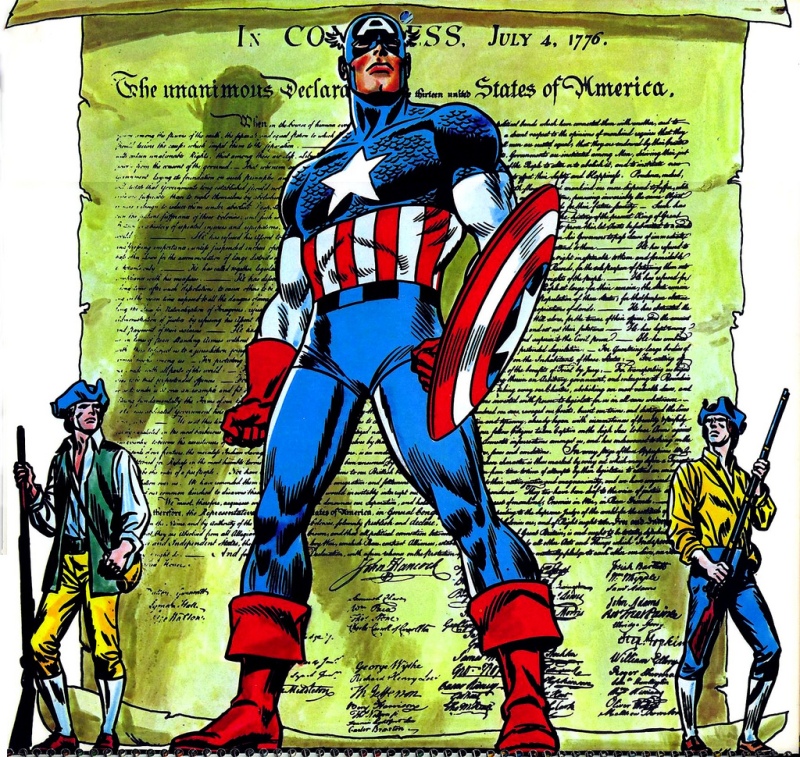 Chon Wang: “The English are not very friendly.”

Chon Wang: “What did they lose?”

Roy O’Bannon: “A little thing called the American Revolution, Chon… They came over with about a million men. We had a bunch of farmers with pitchforks and beat ’em like a drum.”

The political systems in both the US & UK these days are as mad as a bicycle. And then some.

Today, your fest may not have the right zest, or your grub may lack the necessary relish, whilst grudgingly knowing that such a deplorable doofus is running your country (into the ground), but your Brit correspondent here would like to assure you that my thoughts are with you during these very trying times.

You will NOT see Brad meddling in politics – by Jove, no!

Why, the very word itself is detestable: consisting of “poli” which means “more than one” – yours truly is an old-fashioned type o’ fella: can only handle one lousy inconvenience at a time. While “tics” are bloodsucking parasites.

You see? Not my scene.

Couldn’t proceed without this BBC comedy gem from 1980, the year in which current affairs analysts on both sides of The Pond could not envisage a ’50s B-movie star in the White House.

Jumpin’ Jehoshaphat! How times have changed…

“When I was a kid, my Mum said: ‘Work hard, you can become President!’ because I grew up in a Disney film. That was back when we believed that Presidents were righteous and honorable… Here’s the kicker: according to the odds, there is 40% chance that, as President, somebody is going to try to assassinate you, but there is a 100% chance of character-assassination…” – Rich Hall.

Fact: Brad did not travel overseas until his early-20s.

As my inaugural trip outta Blighty, guess the only one desirable destination that sprung to mind.

Yep! That’s right: during May 1996 – one of the highlights of this boy’s life – Brad spent a fortnight on YOUR side of The Pond. Manhattan, to be exact – sight-seeing (searching for those crucial movie locations, mainly). There was no need to fret over how to wrangle a cab to get me to the IYH (International Youth Hostel) – sitting next to me on the flight was a British businessman who kindly offered to give me a lift Uptown. And, as a regular visitor, he gave a few tips on how to get by.

Can vividly recollect waking up on my first morning in another country.

The temperature was scorching; the city noise every bit as cacophonous as my craziest dreams had imagined; and as my feet hit the NY street for that very first giddily-exciting time, which song on my Sony Walkman marked my wild-eyed an’ gawping-gob entrance into Pretzel Central?

Well, goldarn it! It had to be this:

“See me walkin’ down Fifth Avenue, walkin’ cane here at my side. Take it everywhere I walk, I’m an Englishman in New York” – Sting.

As a member of The British Museum Society, the Manhattan Metropolitan Museum of Art was top-of-my-list and – gee whiz! – it did not disappoint! A whole afternoon was spent mooching around its impressive galleries. Then emerged into the relentless sun to get a hot dog an’ a bag o’ donuts from the multitude of street stalls crowding the pavement – sorry! – sidewalk.

After visiting the Statue of Liberty, made my groovy way up Downtown to Uncle Huckle-Buckle’s Chuckle Hutch (try sayin’ that after a few Buds!) to sit down and listen to the stand-ups; can’t forget my ears popping in the express elevator to the top of the Empire State Building; and other wondrous sights and sensations too numerous to drone on about here(!)

Out and about in NYC, chances are that you will see some very famous people. One day, taking a route recommended by my Tourist Map, a classy African-American lady marched straight past me – yes! None other than Diana Ross!! Ruminating over which was her best: either Baby Love or Chain Reaction, walked around a corner and almost collided into John Lennon’s widow!! (Don’t forget: you heard it here first). A few months earlier, we had recorded Jackie Mason Live In London – a programme that my father always requested to watch and never failed to reduce him to tears of laughter. So, imagine papa’s envy when listening to my incredible story of hanging around in the doorway of the Waldorf Astoria, standing next to the comedian himself, listening to the joke that reduced two NYPD officers to tears of laughter.

And upon returning to the hostel every evening, a special, extra-large, local delicacy awaited all tourists on the front desk. Absolutely scrumptious! What on Earth was it?!

After ten days of intense adventures, no wonder there was no energy left; nevertheless, my last four days turned out to be equally life-changing; just around the corner(!) two important discoveries were made in that “New World”: the Barnes & Noble Superstore (ended up buying two books for myself and two books for Dad); and even more crucially:

Obviously, if and when another Stateside visit occurs, special detours will have to be taken so that, finally, WE CAN MEET and you can regale me with tales of YOUR bigger and better way of life!

Who better to round this Post off than with The Boss himself?!

What better way to sign off than by saying:

“Day of glory! Welcome day!
Freedom’s banners greet thy ray;
See! how cheerfully they play
With thy morning breeze,
On the rocks where pilgrims kneel’d,
On the heights where squadrons wheel’d,
When a tyrant’s thunder peal’d,
O’er the trembling seas…
O let freemen be our sons;
And let future Washingtons
Rise, to lead their valiant ones,
Till there’s war no more.”
~John Pierpont (1785–1866), “Independence”

12 thoughts on ““The Purfuit Of Happineff”: Happy 4th Of July To All My American Friends!”