Skip to content
HomeBy The Great Nebula!: My Bronze Age Comics Collection Has Outgrown Its Own Containment Vessel!!

“You scoff, man of the Kree. What would you say if I told you that an Earthling had knowledge of the Omni-Wave?! A weapon capable of obliterating entire solar systems. And that woman knows how to build one!” – Ronan The Accuser.

“And as the giant ship leaves the Earth’s atmosphere, the port through which she entered seals with a crackle of alien energy.

“While deep within the awesome vessel:

“Well, Johnny, I’ve always wanted to be on your show, but where are Doc And The Band?”

‘Tis a day upon which to rejoice! It is a year ago to the day since this collection began! So many excellent ishs have graced the substantial box recruited to stock them, but, in truth, some now lie scattered around the Drawing Room, straight through my Inner Sanctum (not surprisingly), and here, sprawled across my desk within my Control Centre as these words were frantically typed.

Please don’t worry about that loud scraping you can hear in the background – have set me minions to work rearranging these gargantuan piles of Bronze Age awesomeness!

So, where to begin?!

Ah, what the hey, this survey’s too good t’miss!

“The Millennia Bloom flares to life within the Crystal Cell, its gentle coruscating light painting Ms Marvel in rainbow colours…”

Welcome to the Bronze Age, man!

As previously mentioned on these Posts, Ms Marvel has proved too much of a hit-and-miss title for me. Fortunately, however, upon learning that the art for #19 (Aug 1978) was done by Carmine Infantino, before you can say: “Love me, love my zap-hammer,” it had taken a coveted place in the Bradscribe Prestige Collection i.e. top of the pile.

The cover teases a cameo by Captain Marvel, but a dramatic intervention by Ronan (“You called me boy!”) the Accuser ups the thrill-power quite considerably. When wicked villain: Supremor subjects our heroine to a mind-probe, we are treated to a sensational biography of Carol Danvers: from her father letting only her brother go to college; her rebellion by joining the USAF; becoming NASA’s Chief of Security where she meets Captain Marvel; and being genetically reconstructed inside the Psyche-Magnitron by accident (in that inimitable Marvel way?). 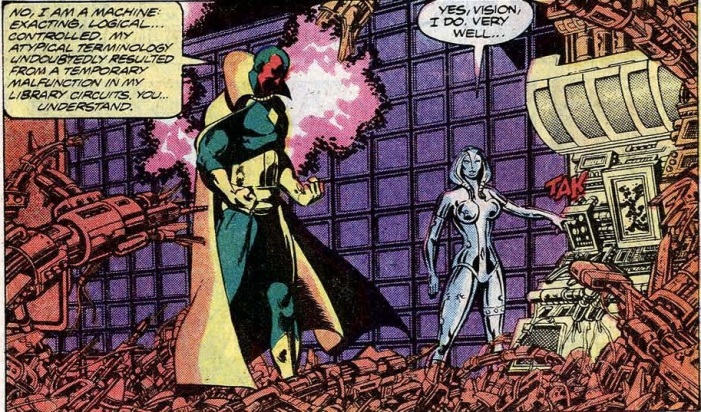 The Vision: “Even I, since Wanda, my wife, departed on extended leave, have felt an uncharacteristic emptiness, a gnawing. Almost… almost as though I were a bridge without a shore.”

One of the indisputable joys of Bronze Age comics just has to be The Avengers.

Constant changes of artists may have condemned Ms Marvel to a premature cancellation, but the ploy actually benefitted Earth’s Mightiest Heroes!

Ish #194 (April 1980) offers a superb script by David Michelnie and ace art by George (Man-Wolf!) Perez, the condition of my ish is immaculate – surely, no other mitts have touched its pages these past 37 years! (Wake up – smell the mint).

As a big fan of The Vision, his extraordinary character is developed very well here. And truly, one of the inestimable delights of this era is catching up with that forever-entertaining double act of Wonder Man and The Beast: 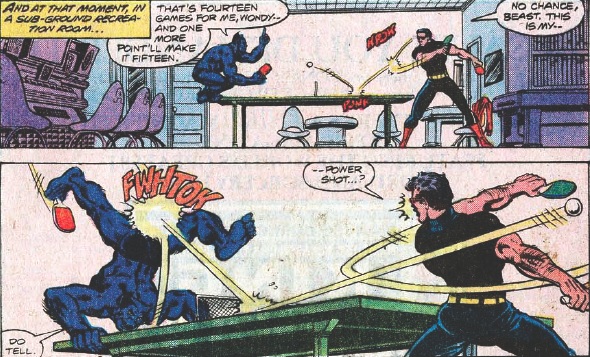 “These refreshments should be sufficient for the Avengers’ Conference. Though I do hope Master Beast will let some of the others try the banana cake this time” – Jarvis. 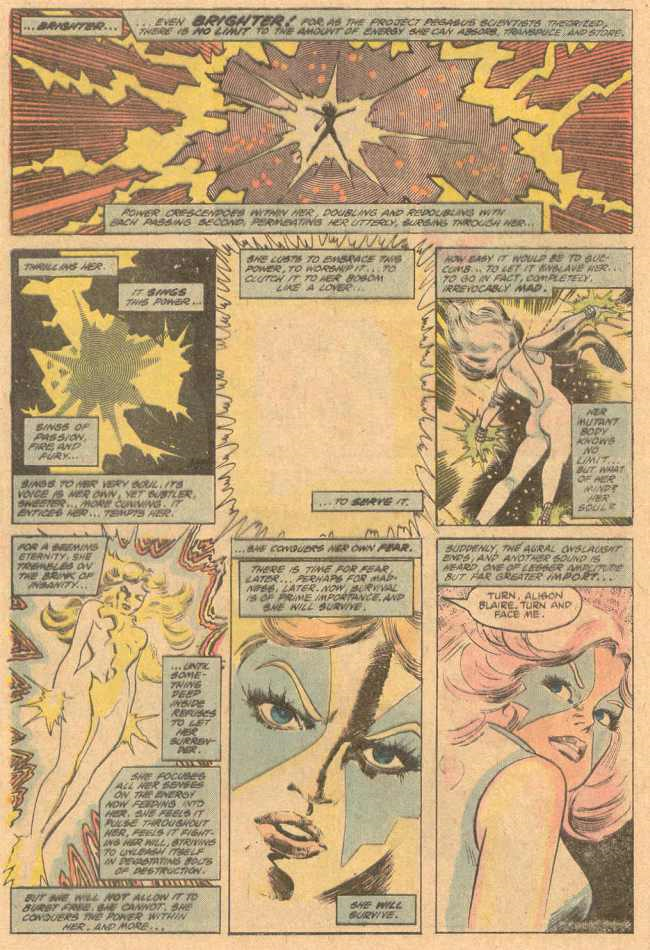 Drone R-II: “Is Galactus not awe-inspiring? Wil it not be an honor for you to serve him, even as I serve him?”

Dazzler: “No! It will not be an honor! The only honor I want is a gold record – but then, that‘s not cosmic enough for you to understand.”

Ships computers have homed in on the being you seek, Master. Subject is located on the third planet of the Sol system: Earth. She is called Alison Blaire. Also… the Dazzler.”

Having dismissed the Dazzler – and she was a sensibly-dressed lass too! – ’twas not long before she made a triumphant return to the shopping list of Brad The Merciful.

You only have to slip in the name of GALACTUS and yours truly will be guaranteed to snap it up!

In Dazzler #10 (December 1981) the genetic mutate who can convert sound energy into light is commanded by that colossal Devourer Of Worlds to venture inside a black hole and return his estranged treacherous herald: Terrax The Tamer to face the wrath of Galactus!

It impressed me so much that we are now on the lookout for Dazzler #11!

“And now, I know ye all would know how ’tis that a mere mortal became a new, more powerful incarnation of Thor himself!” – Loki.

Since being overawed by that Thor: Ragnarok trailer a couple of months back, Hera – the Goddess of Death from Niffleheim – has been on my mind.

As the incomparable John Buscema’s penultimate ish as awesome artist, The Mighty Thor #277 (November 1978). “Time of the Trolls” sees the God of Thunder bereft of Mjolnir – nay! naught e’en a zap-hammer doth he hath!! – as he confronts the hordes of Hela.

In addition to some ultracool scenes with Hela, there is a suitably sinister turn by that ne’er-do-well God of Mischief: Loki.

It won’t startle you to learn that Thor #278 has also swiftly swung into my possession!

“Not bad, folks. I’ve seen some heavy stompin’ in my time… but this takes the cake. Hey, One-Eye, we got what we came for, right? That princess chick? How ’bout we head on home while we got the chance?” – Wolverine.

Can’t complete this Post without including my fave team: the X-Men.

The now-legendary Claremont/Byrne run can go for up to TWENTY POUNDS EACH; the Classic X-Men series commenced in 1986 to reprint the earliest stories also featuring sterling artwork by Dave Cockrum – but even those ishs are now difficult to find.

#14 (October 1987, but reproducing work first published in 1978): “Where No X-Man Has Gone Before!” sees our beloved mutants cast through an alien stargate to the other side of the galaxy where they must combat Gladiator and his gang of praetorian guards (i.e. more “costumed creeps”). Cyclops et al are aided in their struggle to free Princess Lilandra by – oh yes! – the Starjammers.

This series excelled because, in addition, each ish included a bonus story pencilled by John Bolton. The extra tale presented here: “What Stuff Our Dreams Are Made Of…” is one of the best, with a lone Lilandra making a perilous spaceflight to reach Xavier…

Professor Xavier’s students have long held a special place in my heart (as well as my archives!) It has been an absolute blast catching up with this particular series – one of the main reasons why this belated Bronze Age quest set out in the first place.

And lo, they did NOT NEED zap-hammers to become legends… 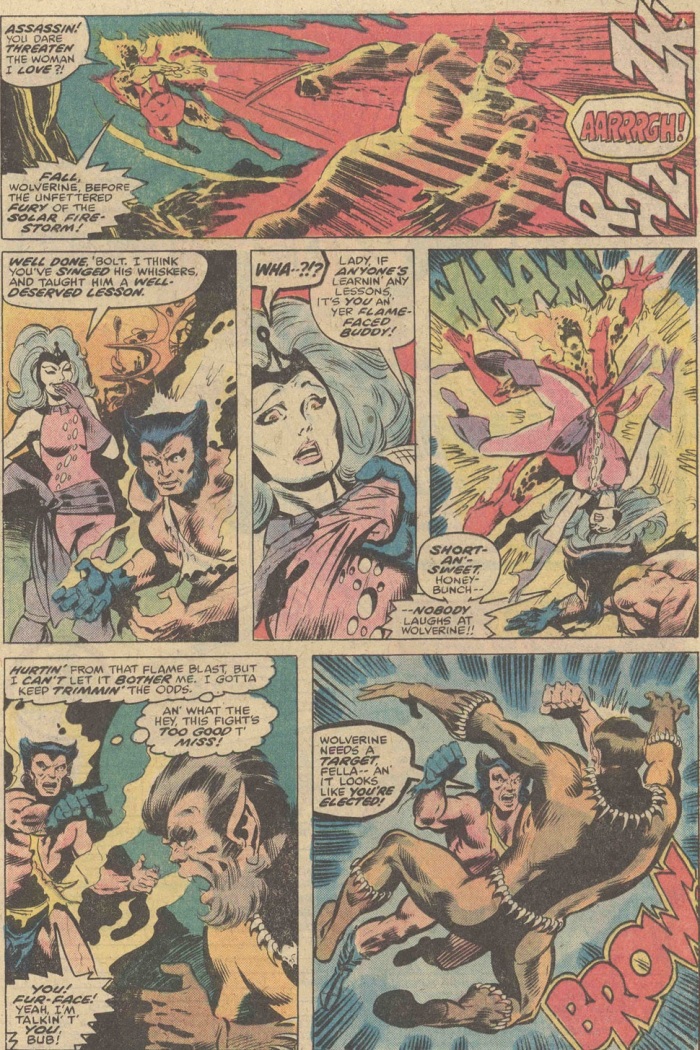 “Phantastisch! Eat your heart out, George Lucas. This is a real Star Wars!” – Nightcrawler.

“Incredible! The body of one is so powerful, so dense that even the rays of the Analyzer cannot penetrate it, and the other one pulses with strange power… a force that is somehow concentrated in the brand on his chest” – ROM.

Incidentally, the (mis)adventures of Marvel’s most boisterous boys were handled brilliantly by one of the few women writing comics at that time: Mary Jo Duffy.

Aha! When you can get three Marvel legends for the price of two – especially in the amazing classic that is #73 (September 1981) – you don’t hang around! “Wraith, Colour And Creed” begins with ROM: Galador’s Greatest Spaceknight rampaging through the terrified throng of Times Square, zapping (with his Neutralizer, NOT a hammer!) a select few, while sparing others. Just doing his noble duty, banishing DIRE Wraiths to limbo, of course, but as far as Luke and Danny are concerned, this is a “murderin’ tin man” and they’ve “gotta score t’settle.” The way in which Rom ultimately convinces them that he is indeed one of the good guys is superb.

The guest pencils by Greg La Rocque are fab, while – as usual – Mary Jo crafts a splendid yarn.

Ah, some great times were had back in the Bronze Age – still the BEST era for comics imo.

Tell me: in the glossy Marvel mags of today, do Steve “Hydra” Rogers, Kamala Khan – or even the female Thor for that matter – wield a mighty zap-hammer? 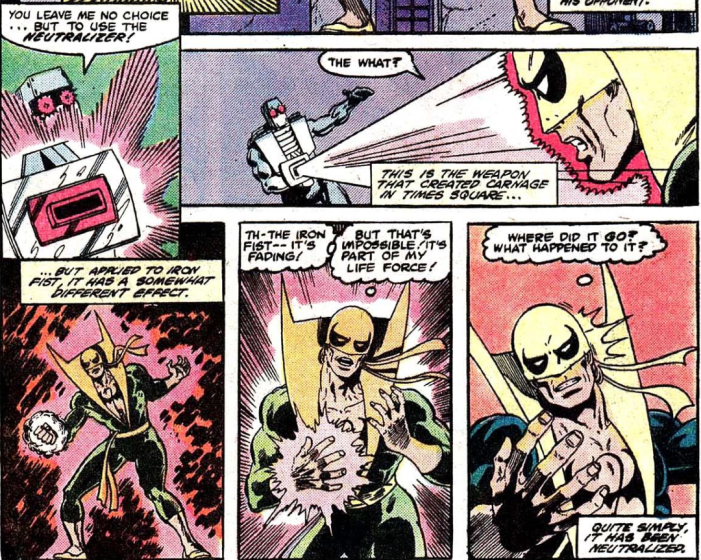 “Birds… They turned into flippin’ birds an’ flew away. I saw it. If what Rom’s sellin’ us is straight, anyone I know could be one’a them things… anyone… Birds. Jeez…” – Luke Cage.

14 thoughts on “By The Great Nebula!: My Bronze Age Comics Collection Has Outgrown Its Own Containment Vessel!!”