Skip to content
HomeThe Unusual Suspects: Getting To Grips With The Guardians Of The Galaxy

Puttin’ The Groot In… 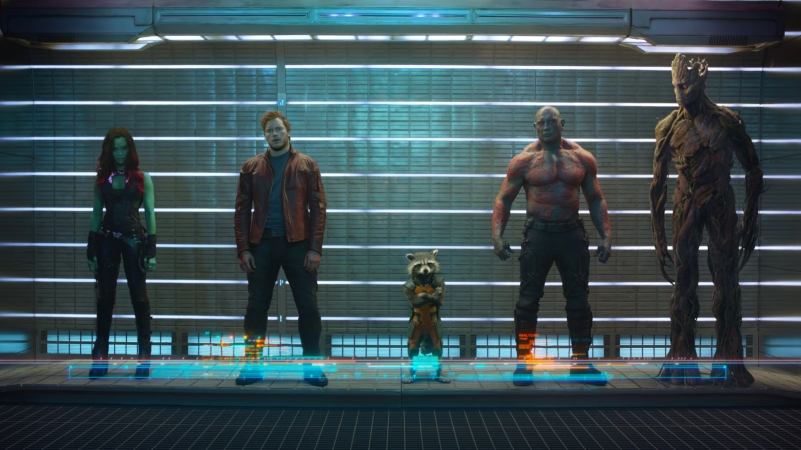 “This may not be the best idea…” – Rhomann Dey.

I can’t stop this feeling, deep inside of me…”

In other words, the sheer anticipation of waiting for the release of one of the MCU’ s finest…

Back in the Summer of ’14, when Guardians Of The Galaxy – Marvel Studios’ biggest gamble, featuring a bunch of unknown misfits – defied all odds to become the most successful (and our favourite!) movie of the season, but we were crestfallen to learn that we would have to wait THREE YEARS for the inevitable sequel.

Now! Guardians Of The Galaxy Vol. 2 opens next week, but here in the UK tomorrow.

Eager to learn more about this cool cosmic combo – especially during these past few months – this blogger did what he does best: research. Was amazed to discover that, once upon a time, the Guardians HAD been a part of my infant reading time, although they existed in a different guise. 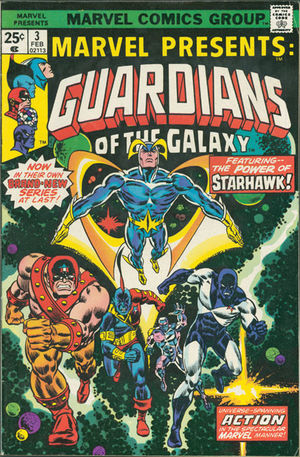 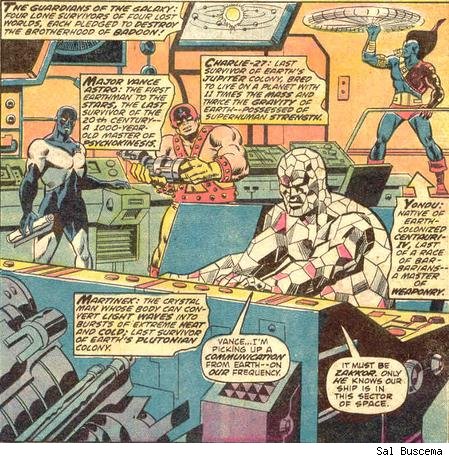 “Drop the leg and return to your cell!” – Kyln Prison Guard.

The original Guardians Of The Galaxy made their debut in the Marvel Super-Heroes #18 (January 1969), written by Arnold Drake and illustrated by the incomparable Gene Colan. They later starred in Marvel Presents #3–12 (Feb. 1976 – Aug. 1977), and were – apart from a certain Yondu Udonta – completely unrecgnisable from the irascible yet intriguing gang we embraced in the 2014 movie.

Their adventures took place in the 31st century in an alt-time-line of the Marvel Universe on Earth-691. Consisting of Charlie-27: a soldier from Jupiter; Martinex: a crystalline Pluvian; Yondu: Last of the Zatoans of Centauri IV, with a large red fin protruding from the back of his head; Starhawk: an anti-hero, aka Stakar of the House of Ogord; and Nikki: a genetically-engineered Mercurian girl. They were led by Major Vance Astro (who just happened to be an astronaut from 20th century Earth!)

In later, sporadic appearances, they were aided in their ongoing struggle against the Badoon by such legends as Captain America, The Thing and the Defenders.

The Guardians we know and love from the movie did not make their comics debut together until 2008, although each character had made separate appearances much earlier.

Confusingly, Starlord also emerged in those same ishs of Star Wars Weekly, but with his own separate (reprinted) strip, illustrated by the great Carmine Infantino.

“Do you got any other cute little buggers like this one? I like to stick ’em all in a row on my control console” – Yondu Udonta.

“What matters is telling a great story,” director James Gunn explained while discussing the eight-month writing process from which this sequel came to fruition. Encouragingly, he describes Guardians Of The Galaxy Vol. 2 as a continuation, rather than a replication of what thrilled us first time round.

As you have probably surmised by now, Brad digs his SF quotes, and James Gunn (and Nicole Perlman!) did us proud with a cracking script full of witty and wonderful lines. So, naturally, one expects Vol. 2 to exude the same levels a’ fun and energy.

“Some of our sets at the end of the film are over a trillion polygons, which is by far the biggest visual effects of all time…”

Fortunately, early Reviews sound promising. What sounds really encoraging is the development of most, if not all, main characters, plus the introduction of a few interesting new faces, such as Mantis and Ayesha. Considering how all Gamora did during her big screen debut was just twist and shout, it would be great to see her do something more substantial. Also, one of the faults of the first film – Nebula barely making her mark on proceedings – will be rectified this time as she now appears as a new member of the team!

Oh, Kurt Russell?! Whoa, this Post is already brimming with plenty a’ awesomeness as it is – phew! (This icon will be blessed with his own Bradscribe Post, possibly as early as next week!)

Yes, of course – and this goes without sayin’ – Baby Groot is just TOO ridiculously cute! Got Groot gifs gracing me Media Library already – and that ain’t a bad thing!

All in all, be prepared to laugh loads.

With Kurt Russell confirmed to co-star, people got excited over a potential Tango And Cash reunion.

Not so, laughed Gunn. “I think the more important relationship is between Stallone and Michael Rooker” he confirmed. “So [Vol. 2]’s more of a Cliffhanger reunion.”

Cliffhanger, eh? What better way to leave us on tenterhooks…

So, the long-awaited Guardians Of The Galaxy Awesome Mix Vol. 2 Soundtrack was released this past week. Three years ago, just like everybody else, yours truly compiled his own list, trying to predict what Mummy Quill’s Awesome choices might be.

After rackin’ me mental jukebox, and twistin’ the Power Cosmic, these records (having been locked away in the vaults @ Brad Manor for the past three years), are what Brad came up with:

Personally GUTTED that no T. Rex track made it.

Cosmic Dancer describes Peter perfectly, doesn’t it? But after the big reveal of who/what his Dad is, Life’s A Gas came to mind: “I could have loved you like a planet” – eh, eh?!

The Steve Miller Band was a crafty choice – in Peter’s case it’s: Take The Orb And Run – ha ha!

And as for Jefferson Starship: that IS the tune Peter and Gamora dance to… surely?!

Hey, hey, see how it all works together? Ha, ha, not just a pretty face, me!

Okay, so the rest of me – espesh my (woeful) powers of prediction – s’outta place. Maybe should have plumped for this one – it’s probably the standout track of this compilation:

“I live for the simple things… like how much this is going to hurt! Yeah, writhe, little man…” – Rocket Raccoon.

9 thoughts on “The Unusual Suspects: Getting To Grips With The Guardians Of The Galaxy”