If you’re not already following her please visit her at:

“Mystery creates wonder and wonder is the basis of man’s desire to understand” – Neil Armstrong.

The Rules or Guidelines for the Mystery Blogger Award:

1.Don’t have a smartphone

Well, after a hard day scanning a computer screen, the last thing one wants to do on the way home is view an even smaller one! An older Samsung to chat/speak w Mrs. B. will suffice for the time being, thanks.

2. Haven’t had a drop of alcohol for over a year now

Reached that stage in my life where so-called “friends” no longer keep in touch, so there is no incentive to  socialise any more.

If you’re wondering what has been officially making the Bradscribe booty bounce around this week, well – get on the good foot – it’s this:

Questions Asked of Me:

If you could speak any language you don’t currently speak, what would it be?

Wanted to study German; it would have aided my Archaeology studies at Uni, and it was agonising not being able to understand what they were nattering about in Das Boot, Raiders & Aguirre, der Zorn Gottes. My application to study German at school was turned down because…? My French was not deemed good enough- duh, what?! Gottverdammt…

If you could (or had to) live anywhere other than where you currently live, where would it be?

On the Gulf Coast of Thailand with my darling wife. Sounds simple but isn’t – now there’s a mystery…

Screenwriting and directing my own material. Not a famous blogger; at least, not yet…

If you had to die for a cause, belief or ideal what would it be?

If you could be on the first spacecraft to Mars (and make it back to Earth in your natural lifetime) would you?

Okay, weird answer: of course! But what on Earth would make me want to make it back?!

1.Which comic book character should get his/her own movie?

2. What is your favourite Joy Division song?

3. Who would play you in the movie of your life?

4. What is the Worst Movie Ever Made?

5. If you could go back in time, when/where would you go?

(in this case, the most successful):

“Science cannot solve the ultimate mystery of nature. And that is because, in the last analysis, we ourselves are a part of the mystery that we are trying to solve” – Max Planck.

What Is The Purpose Of This Movie?

“The premise is that aliens are landing in places that make no sense, and nothing is happening. The world is freaking out… I love that” – Denis Villeneuve.

“I was in love with the exaggeration of reality or exploration of the world from a different point of view, which is science fiction” explains Denis Villeneuve.

When the French-Canadian director admits that “it’s tough to find good science fiction material,” at least he has tried – and succeeded – to rectify this matter in the intriguing form of Arrival, the sort of thought-provoking SF that rarely gets the big-screen treatment.

Based on Ted Chiang’s novella: “Story of Your Life” – a “highly scientific, not inherently cinematic” work – twelve massive, shell-shaped spacecraft appear in the most unlikeliest locations around the world. And the race is on to find out What They Want.

On a university campus, comparative linguistics professor Dr. Louise Banks, (played by Amy Adams), realises that constant low-flying jets and a collision in the car park signify that this is turning out to be no ordinary day.

After learning about the Breaking News of the Century – strangely enough on an HD TV, not via smartphone – the Prof is soon whisked away by Colonel Weber (Forest Whitaker) to Montana where the USA’s very own extraterrestrial representative has chosen to hang around.

There is no explanation as to why a section of the craft opens up every eighteen hours, or how this arrangement was initially achieved but, nevertheless, a palpable sense of wonder ensues.

“…At the end of the day, it’s a story about a woman and her child, and the choices she makes. That’s really interesting to play in a sci-fi movie about communication and global war” – Amy Adams.

Why are they here, indeed.

For the central role, Adams puts in an engaging performance, one of intimacy and empathy, managing to elevate this material from the depths of absurdity to which it could so easily have sunk.

And despite its disturbing nature, the gradual unravelling of international tensions actually makes for compelling viewing.

Perhaps the most enthralling scene is the intrepid hazmat squad’s literally breath-taking ascent into the spacecraft, and their conversion to a vertical gravity. One discrepancy and all the guests would hurtle back/down to terra firma!

The visitors referred to here as  “heptapods” appear and dissolve in mist behind a transparent screen. They reminded me of the tentacled martians as depicted in The War Of The Worlds; the whale-like sounds they emit are particularly haunting.

“Abbott and Costello” – how charming! Why do we see just two of them? …And we didn’t get to find out why they each have seven legs, either.

“I didn’t think it would look as big and expansive as it is. We’re in a black box. With a white screen and a hazmat suit… It emotionally wrecked me” – Jeremy Renner.

What a relief that Arrival spares us the eerie and stereotypical dramatic scenes of the alien armada ominously approaching Earth. Quite unlike more standard alien invasion flicks –gadzooks! They’re here already! An unsettling touch if ever there was one. And it is not – hallelujah! – an invasion anyway!

Such a welcome cavalcade of subtle ideas: scientific, cultural and – oh yes! – linguistic. Part of the fascination for this movie centred on wondering how Villeneuve et al would bring it to a satisfactory denouement. Had expected a twist, but on a non-linear level? Heavy, baby.

Ultimately, its stark themes convince us that this film is not about the aliens, but about us: the complicated bipeds. In attempts at First Contact, these proceedings instead invoke that inherent inability to effectively communicate among our own species. Not only does communication (and co-operation) break down, in this hi-tech age, it gets switched off!

As one news reporter rightly remarked at one point, whatever benevolent need our visitors require, why do they come in twelve ships, when only one would have sufficed?

It is startling to realise that in that cramped and bustling army camp in Montana, Dr. Banks is the only major female presence. Really?!

It is almost miraculous how she and physicist Ian Donnelly (Jeremy Renner) crack the intricacies of the alien non-linear orthography in unbelievably short time and in such stressful geopolitical circumstances.

Perhaps Arrival’s greatest asset is that, in a world increasingly tearing itself apart through social unrest and breakdowns in diplomacy, it could not have been released at a more apt time…

When We DO make Alien Contact, What Will We Have To Say? And How…?

And By What Means Can We Begin To Comprehend What THEY Want?

“What the hell are we supposed to use, man, harsh language?” – Private Frost.

“Thousands have taken to the streets amid growing unrest at the perceived “alien invasion,” reads the Breaking News banner.

“Governments across the globe have declared a state of emergency urging residents to remain in their homes until meaningful contact can be made.”

The exciting, yet cautious, notion of first contact with (intelligent) extraterrestrial life has often popped up in movies, books and essays, but they all – frustratingly – fall short of supposing how such a landmark event could be achieved.

The most prominent SF extravaganza to tackle this premise (refraining from military antagonism) and emphasize attempts at establishing connections with alien visitors happened to be Steven Spielberg’s Close Encounters Of The Third Kind (1977), in which initial connection transpired through exchanges of musical motes.

“I really misunderstood that linguistics was closer to being a translator… When you’re approaching language, you look at structure, anthropological, sociological… how it exists inside of that. It’s got very complicated” – Amy Adams.

Just opened in cinemas this week is Arrival, a most-welcome package that dares to offer something more cerebral rather than just aiming to be visually spectacular.

After twelve ovular smooth and shell-like spacecraft appear in skies at various locations around the world, answers – rather that action – is called for. The military (led by Forest Whitaker) enlist the services of leading academic linguist Dr. Louise Banks (played by Amy Adams) to try and work out why they are here, and what do they want.

Curiously, every eighteen hours, a section of the craft suspended above the plains of Montana opens up, allowing Banks and physicist Ian Donnelly (Jeremy Renner) to try and facilitate a basic exchange of communication.

The new Arrivals are revealed as seven-pronged starfish-like creatures dubbed “heptapods.” Intriguingly, these visitors do participate in contact, but only by emitting a highly sophisticated form of non-linear orthography – rings of swirling black “ink.”

How can Dr. Banks hope to suss out something like this?:

“Some supporters of linguistic relativity think that the cognitive benefits of language helped spur its evolution. This is relevant to the movie, as the fate of humanity depends on us understanding their language” – newscientist.com

Among the earliest systems of writing, wedge-shaped cuneiform tablets were produced by the Sumerians in the Ancient Near East five thousand years ago.

Having had the privilege of studying this bewildering civilization at university, one could not help but observe that they seemed so incongruous to World History – the notion of extraterrestrial origins should not sound so fantastical.

Incidentally, their religious texts quite categorically describe “the Ancient Gods who descended from the Heavens…”

Since the Phoenicians developed the first alphabet, scripts for Indo-European languages – of which English is just one member of that family – generally run horizontally from left to right, but with the observation that Arabic runs from right to left, should the heptapod circular “language” be read clockwise or anti-clockwise?

Moreover, at what point on each billowing ring should Dr. Banks begin to decipher these messages? So many syntactic and semantic aspects to consider in such a fascinating and – considering what is at stake – frightening voyage of discovery!

“They use non-linear orthography. Do they think like that too?” 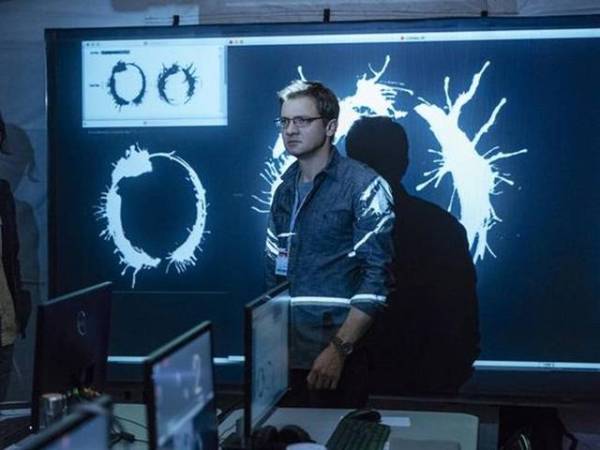 “Are you dreaming in their language?” – Ian Donnelly.

Having already notched up five-star reviews and an encouraging string of superlatives from a wide range of film magazines and websites, Arrival looks set to be the phenomenal, thought-provoking classic that gives SF a good name.

Ultimately, this movie sets out to be more about human understanding, memory, love and fortitude than just delivering yet another tiresome alien invasion CGIfest – far beyond the sensationalist reach of such dumb, inconsequential fare as Independence Day: Resurgence (which we were so kindly subjected to earlier in the year).

To find out how “distinctly original” and “truly exceptional” Denis Villeneuve’s Arrival really is, Brad will be checking it out this weekend. Therefore, a Review is sure to follow!