No strings attached… No spoilers neither! 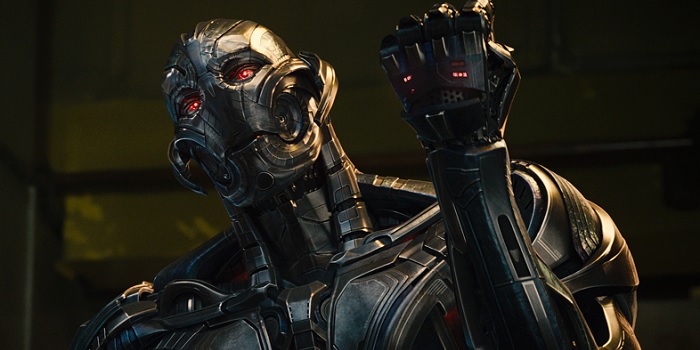 “I just pay for everything and design everything, make everyone look cooler…” – Tony Stark.

You can’t escape it – it’s too big; you can’t deny it – it’s too mega; Avengers: Age of Ultron is the first genuine smash hit of the year. After avoiding some lacklustre releases so far this year, it is a pleasure – and a welcome relief – to reassure you that this sequel is a triumph! This penultimate instalment in Phase 2 of the MCU certainly has everything you could possibly want from a Hollywood juggernaut; thrilling comicbook-style action: check! Groundbreaking effects: check! Fictitious Eastern European countries: …er, check. Dodgy Eastern European accents: ho hum, ‘fraid so…

Ultron was one of the classic villains from the original comics, and his menacing appearance here is truly unforgettable. Admittedly, there were doubts in this camp at the thought of James Spader providing the voice of what is (here, at least) Tony Stark’s creation. From the very first moment you hear it (trust me, you won’t forget it!) this creepy chrome-mech AI makes for a particularly distinctive villain: sorta like a Terminator exoskeleton with unnerving charisma – a dastardly droid to savour…

With all the premise-setting and character-intros sorted three years ago, this outing commences immediately with a heavy-duty action sequence. Hey, it’s really cool to see the gang again; as well as some welcome additions to the ranks, some old friends pop up along the way.

As for superhero-maestro Joss Whedon, it comes as no surprise that Age of Ultron will be his last Marvel epic. After juggling the stories of about a dozen supes and crafting some of the most extensive delirious and delightful set-pieces, anyone would be left mentally and physically drained!

“I’m done. I’ve made ensemble movies exclusively. And this one was harder, by far, than all of the others combined.” Okay, did it top the last one? “It’s a different story, it’s not bigger; it is, in fact, one minute shorter. A personal accomplishment.” 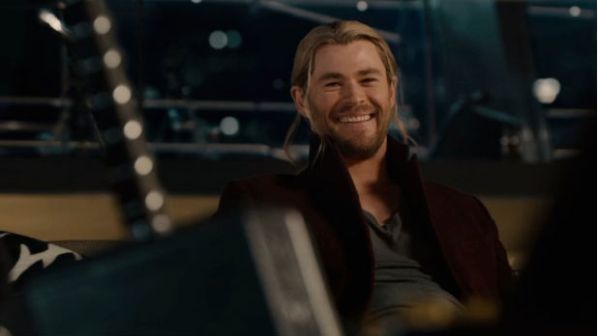 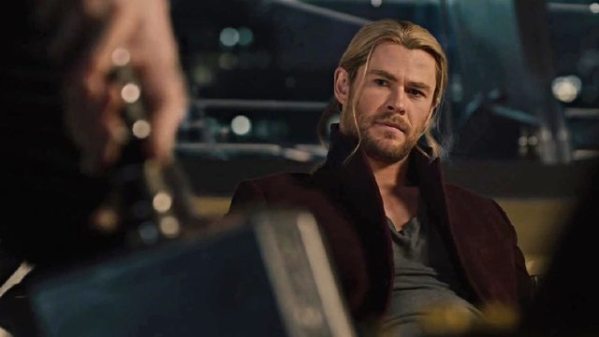 What set The Avengers (2012) apart was its deft handling of fun moments amid the heavy-duty costumed clobbering action, particularly Stark’s cache of wisecracks. Although he has significantly fewer memorable one-liners, this time it’s Thor who gets his fair share of magic comedy moments. Having already enjoyed the instant classic party scene with Thor’s anxious expression – priceless – as Cap America manages to dislodge Mjolnir “a tad,” there are, thankfully, countless other entertaining merry morsels amid the mayhem.

You could argue that this 2015 model is just a copy of the 2012 classic; expect to see plenty other heroes plucked from Marvel’s illustrious vault as this genre expands further over the next few years, but don’t expect to find much character development therein…

The effects have reached such a slick level that the action sequences get so multi-layered and convoluted that they can just wash over you. Such is the modern role of the “actor”: go through the required motions and have some bizarre concepts digitally added/enhanced later. More than ever, Hulk’s actions – even his facial contortions – are more intricate this time and-

hold on: how does Hulk even show up against a green screen?…(!) 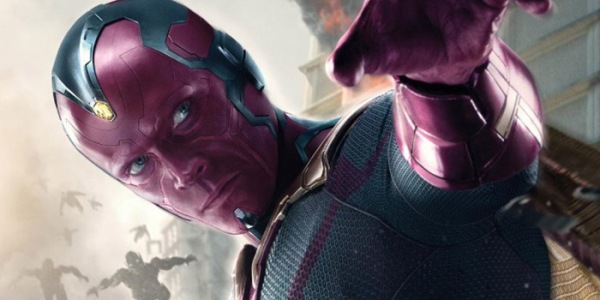 “I beg your pardon, I am a synthozoid, not a robot! As such, I am a perfect meld of computer micro-circuitry and living, synthetic flesh. In all ways, I am a fully functional man!” – Vision.

So, having waited only a measly thirty-five years to see my favourite Avenger on the big screen, did Avengers: Age of Ultron deliver? Well, from his fantastic introductory scene, Paul Bettany is striking as the Vision. It’s odd to see a purple synthezoid, considering how he’s always been depicted in a yellow and green costume. Yet the most curious aspect of this big screen realisation of Vision is the fact that he has… pupils in his eyes. Maybe Bettany is adverse to wearing contacts? Most curious…

Did we really have to see Black Widow get the hots for Bruce Banner? The only love interest in the Avengers Universe that matters is the bond between Vision and Scarlet Witch. Both appear in this sequel, but their intriguing characters have little opportunity to evolve here – literally, blink and you’ll miss the scene they share together while droids are eliminated and a city crumbles around them…

Seriously, for such an integral member of the team, it’s a travesty that Vision doesn’t get much to say or do! The sheer wonder of this character lies in his ability to lower his density and mass until he is lighter than air. Sure, we see him fly, and fire energy beams through that jewel embedded in his forehead, but where is his trademark trick of flying through walls or disappearing through ceilings with that “almost imperceptible crackle” as so lovingly told in the comics? Opportunity (sorely) missed, methinks…

But the most nagging “problem” with this mighty blockbuster has to be: how can The Avengers: Infinity Wars (Parts 1 and 2 expected in May 2018 and May 2019 respectively) possibly top this?! 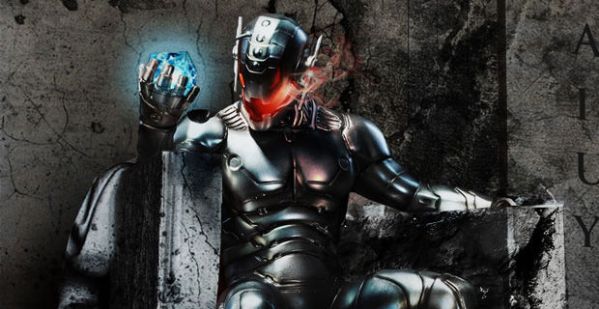 “I was designed to save the world. People would look to the sky and see hope… I’ll take that from them first!” – Ultron.

Groovy, but it’s only fair that the lady should have the last laugh… 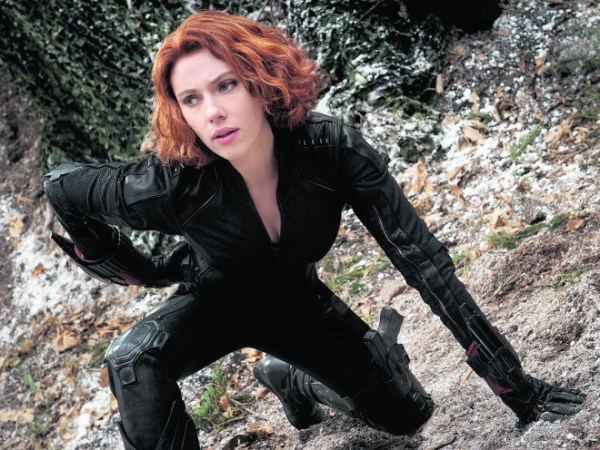 “You’d be surprised at how un-macho male actors are. All of us are extremely emotionally delicate, regardless of gender. Once you put men in tights, it’s a great equaliser” – Scarlett Johansson.

There has been an Awakening. Have you felt it?

“What Star Wars has accomplished is really not possible. But it has done it anyway. There is no place in our culture for this kind of stuff. But the need is there; the human need to have the human condition expressed in mythic terms” – Harrison Ford.

Major develoments of geekgasmic proportions hit – nay, engulfed – the web on Thursday. Just when you thought the Second Trailer for Star Wars Episode 7: The Force Awakens lay in wait to POUNCE ON YOU when the new Avengers movie is released in a few weeks time, it was sprung last Thursday instead, at the Star Wars Celebration event – the official fan festival taking place these past few days at Anaheim Convntion Center.

20 million views in 20 hours indicates that the MOVIE OF THE DECADE is shaping up rather nicely. The first teaser Trailer in November gave some tantalising – albeit fleeting – glimpses of what we can expect from Star Wars Episode 7: The Force Awakens. It merely stirred my curiosity; as someone who enjoyed the classic trilogy on their respective original releases, the thought of an Episode VII (and VIII and IX for that matter) just passed over me.

But what was released last Thursday managed to do the unthinkable: restored my faith in a galaxy far, far away and make me (and millions of others?) believe that JJ Abrams is perfectly capable of providing the Star Wars instalment we deserve.

“A lot of movies you see today are circus movies. It’s now gotten to be more and more circus than substance. I get blamed for a lot of that” – George Lucas.

No sooner does this second trailer begin, we embrace that familiar John Williams score once more; the intro scene treats us to an amazing panning shot of a landspeeder passing what has been described as a crashed X-Wing Fighter and- GREAT ODIN’S BEARD!! GETTA LOADA THAT STAR DESTROYER!! BLINKIN’ AWESOME!! (ahem)…

Surely something that humongous would have broken up on impact? Even the seemingly-unsinkable Titanic broke in two before descending to its deep resting-place, but hey – to hell with physics – this scene alone just looks SO DAMN GOOD. Yep, gimme my Wallpaper now, please.

Incidentally, it was assumed that the featured desert planet was Tatooine, but apparently not, as further research showed; Star Wars: Battlefront features: “the Battle of Jakku, the pivotal moment when the New Republic confronted key Imperial holdouts on a remote desert planet on the Outer Rim,” which ensued “in the aftermath of the Rebel victory in the Battle of Endor.”

Okay… intriguing, but don’t you think we’ve rejoined this action far too late? Apparently, the brand new video game: Star Wars:Battlefront fills in the necessary events between Episodes’ VI & VII. But for those of us not into gaming, explanatory background details can be obtained during the coming months with the publication of no less than twenty novels…!

“…George wanted to know whether we’d be interested. He did say that if we didn’t want to do it, they wouldn’t cast another actor in our parts – they would write us out” – Mark Hamill.

How did this “First Order” come to prominence?! Who are they? In the above pic, it’s obvious that there is no shortage of stormtroopers. By the look of the hardware they have on offer – including TIE (Twin Ion Engine, remember?) fighters – the galactic economy did NOT crumble along with the Empire. Who – or what – tellingly, pulls the strings of this techno-fascist combo?

While on the subject, those new X-Wing fighters belong not to the Rebel Alliance we all know and love, but to an outfit – whose most prominent member (thus far) is Poe Dameron (Oscar Isaac) – referred to vaguely as the “Resistance.” Great, the Imperial system may have been removed, but that deplorable ideology only transmogrifies into something all-too-familiar. Here we go again; when you’ve seen one galaxy, you’ve seen ’em all, etc…

Anyway, it will be a personal joy to see Luke again, but at the moment – agonisingly – there is only speculation as to what possibly happens to him now. With a subtitle like: “The Force Awakens” (a tad flat,eh?) we know that the Jedi legacy will play a prominent role; but how?

And how does that dude with the crossguard lightsabre, supposedly called Kylo Ren, fit into this new set-up? It should be said that this latest Sith(?) figure is shaping up to be a veritable outstanding villain. And- hold the bus! Who is… this?!

“There are a ton of rumours – some true, some false. But I’m grateful for everyone who would want to read a spoiler because it means that they care and want to see the movie. I know what it feels like, as an enormous Star Wars fan myself” – Jeffrey Jacob Abrams.

Who, exactly, is this cool, distinctive chrome-clad stormtrooper? Cool gun; cool (black and red) cape… he’s even walking with a cool gait.

He?! One of the more striking statements floatin around the rumour-mill is the likelihood that this character – who may be Captain Phasma, leader of an elite band of stormtroopers affiliated with this First Order – is played by Gwendoline Christie, best-known for playing Brienne of Tarth in the ludicrously-popular Games of Thrones. According to Badass Digest: “Christie is playing John [Finn] Boyega’s commanding officer… and she’s mad that he deserted.” As the saga’s first female stormtrooper, it’s hoped that this intriguing character in particular can be developed properly and respectfully.

What is most reassuring about all the exclusive images gleaned from both trailers is a welcome return to more natural imagery rather than an over-reliance on that overblown CGI BS concocted for those wretched prequels.

There are some terrific titbits of news and gossip aplenty surrounding this gargantuan blockbuster, but this, by far, has to be the most exciting rumour: Abrams is apparently seriously dischuffed about the relentless plot and image leaks from the Force Awakens set that – according to unconfirmed reports (from as early as the beginning of February 2015) on Movie Pilot -he is seriously considering bringing Episode VII out much earlier. Ikwiz added: “Disney are reportedly taking Abrams’ request very seriously and is looking at a possible Summer release.”

Too right! There are millions of us ready to watch it RIGHT NOW!!

So good to see these boys again, but what’s in store for them in this episode?